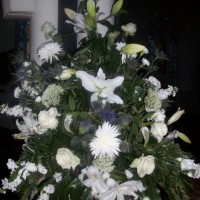 The guild currently comprises thirteen members who arrange and care for the flowers on a rota basis week by week. There is a team of eleven arrangers augmented by two waterers. St. George’s is decorated with floral arrangements to a very high standard with beautiful and often thought provoking floral arrangements throughout the year except in Lent and Advent. Those celebrating the Church’s three major festivals of Christmas, Easter and Harvest are always particularly fine and are produced by the whole team.

Each of these three displays is now advertised by way of a banner outside the church for the week so that the wider community may have the opportunity to see, and enjoy the arrangements and share in the church’s festival celebrations.  The church is open seven days a week (except Bank Holidays) and all are welcome to come in to look around inside when it is open.

The guild’s origins go back to 1994 when Canon Derek Carpenter, then Rector of St. George’s, asked a member of the congregation, Jean Skinner, to take charge of the church’s flower arranging activities which had, reputedly until then, been managed in something of a haphazard way.  Jean enlisted another member of the congregation, Elizabeth Walton to help her, which marked the start of building the team of arrangers we have today and which has now evolved into the St. George’s Flower Guild.

In those early days extra help, principally with clearing up, was enlisted at festival times from Ann Shepherd and Carolyn Fevyer (both still team members), who both apparently professed no knowledge of flower arranging; it appears that Jean had no training either. However, over the ensuing years the team has grown in number and indeed their arranging skills and the quality of the displays has developed to an extremely high standard. According to Jean this has come about by trial and error and learning from a lot of mistakes. To the outsider the reality of the impressive arrangements produced would seem to belie this.

The team was asked to mount flower festivals both in 1995 and 1999; the first, “Time past and Time present ” and the second a “Celebration of the Millennium”. While some help was had with the first festival from people from other churches and flower clubs the second was produced mainly by the St. George’s team.

During Fr. Derek’s rectorship he inaugurated, what has now become the tradition of, decorating the Remembrance altar in the Lady Chapel on Maundy Thursday with Spring flowers. He also introduced the Remembrance lilies at Easter. The lilies do much to aid the decoration of the church and offer people, by purchasing lilies in memory of loved ones, the opportunity to remember them at that very appropriate time, and have the names entered in a list of Remembrance. There have been up to 120 lilies on occasion.

In 2014, after 20 years of being ‘in charge’ Jean felt it was time to have a younger person with fresh ideas take the helm and asked Heather Lloyd, a longstanding member of the team to take over from her. Although Jean stood down as team leader she continues as a member of the team and to be on the flower rotas. She says “the time with flowers has always given me a lot of pleasure” and “what a difference has been made” since Heather took over “with super flowers and different quirks which delight”.

The Present and future

In December 2015 the Flower Arrangers were invited to join the Arts at St. George’s as St. George’s Flower Guild with the guild being formally approved by the Parochial Church Council early in 2016.

In 2017, in the run up to our Arts Festival, we hope to introduce an annual week long Flower Festival to our programme of events and are considering the feasibility of running flower arranging demonstrations and workshops.

The flowers for the chancel steps pedestal and the bowl of flowers in the Lady Chapel throughout the year are arranged under a rota and offers to do them are always welcome with the flowers paid for by the arrangers themselves. Festival flowers during the year are paid for by kind donations or coffee mornings as and the church does not contribute to the cost.

If you would be interested in finding out more about the guild, its plans or joining it please contact Heather Lloyd via the Parish Office 020-8663-6996.