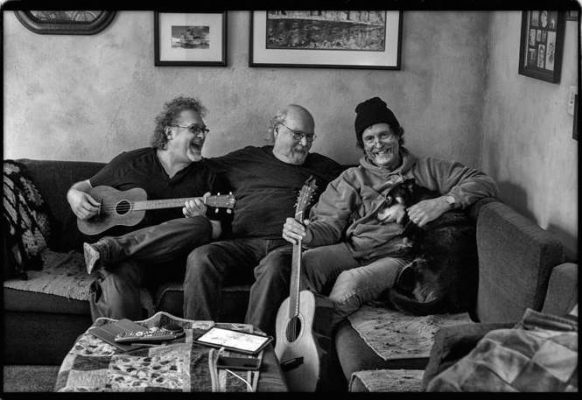 The Arts at St George’s is delighted to announce that Grammy Lifetime Achievement Award winner and US folk icon, Tom Paxton, will be in concert at St George’s in April 2018 when he returns to the UK to perform twelve shows with very special guests, Grammy winning singer/songwriter duo The DonJuans – Don Henry & Jon Vezner.

Within days of writing and playing together, they knew they were onto something. Now they’re taking it on the road!

Tom Paxton is one of the great songwriters of our time. His songs, recorded and released over an incredible 34 albums, are known and loved around the world and have been recorded by hundreds of artists as diverse as Pete Seeger, Willie Nelson and Placido Domingo. Ramblin’ Boy. ‘The Last Thing On My Mind’, ‘Ramblin’ Boy’, ‘Bottle Of Wine’, ‘Whose Garden Was This?’, ‘Goin’ To The Zoo’ and ‘The Marvellous Toy’ are just a few of his truly timeless works…

Tom has also recorded several albums of his own children’s songs and recently sold his sixteenth book to Morrow Junior Books, ‘The Story of the Sandman’.

Tom Paxton has become a voice of his generation, addressing issues of injustice and inhumanity, laying bare the absurdities of modern culture and celebrating the tenderest bonds of family, friends, and community.

In describing Tom Paxton’s influence on his fellow musicians, Pete Seeger said: “Tom’s songs have a way of sneaking up on you. You find yourself humming them, whistling them, and singing a verse to a friend. They are reaching around the world more than he is, or any of us could have realized. Keep on, Tom!”

Guy Clark adds: “Thirty years ago Tom Paxton taught a generation of traditional folksingers that it was noble to write your own songs, and, like a good guitar, he just gets better with age.”

Paxton has been an integral part of the songwriting and folk music community since the early 60s Greenwich Village scene, and continues to be a primary influence on today’s ‘New Folk’ performers.

Originally from Chicago, Tom moved to New York via Oklahoma, which he considers to be his home state. His family moved there in 1948, when Tom was 10 years old, and he graduated from Bristow High School and The University of Oklahoma, where he majored in drama while his interest in folk music grew and eventually predominated.

Brought to New York courtesy of the US Army, Tom remained there following his discharge. His early success in Greenwich Village coffee-houses such as The Gaslight and The Bitter End, led to an ever-increasing circle of work. Then in 1965 he made his first tour of the United Kingdom – the beginning of a still-thriving professional relationship that has included at least one tour in each of the succeeding years.

He and his wife Midge have been married 36 years and have two daughters, Jennifer and Kate. All three women have served as inspiration for many songs, and now grandson Christopher is adding to the sources of inspiration.

He has performed thousands of concerts around the world and that these fans still enjoy him is a testament to the quality of his work. Paxton’s songbooks, critically acclaimed children’s books (available award-winning children’s recordings, and a catalogue of hundreds of songs all serve to document his extraordinary 40-year career.

Tom Paxton’s place in folk music is secured not just by hit records and awards, but by the admiration of three generations of fellow musicians. An internationally recognized and loved cultural figure, he has always chosen goodwill over commercial success. His generosity has taken the shape of a benefit concert performance for a little girl fighting leukemia, or a personal note of encouragement to an up-and-coming songwriter. This is the man who wrote and lives the words ‘peace will come, and let it begin with me.’

He is a man the World has come to regard as its friend.

By their name you might assume that the DonJuans rely merely on their good looks. However, you will be impressed to know that the group includes two GRAMMY® Award-winning songwriters, Don Henry and Jon Vezner. Their song, “Where’ve You Been” (recorded by Kathy Mattea) was the first song in country music history to sweep all major song of the year honors including the GRAMMY®, ACM®, CMA, and the Nashville Songwriter’s Association International (NSAI) awards.

In the nearly 25 years since “Where’ve You Been,” Don and Jon have performed in venues from the Bottom Line in New York City to the Bluebird Café in Nashville, sharing stages with artists as diverse as Joey Ramone, John Hartford, Michael Johnson, and David Crosby. Their songs have been recorded by a multitude of artists including Janis Ian, Ray Charles, John Mellencamp, and Miranda Lambert to name a few. Working as a duo, the DonJuans bring an impressive array of songs, experience, and gifted musicianship.