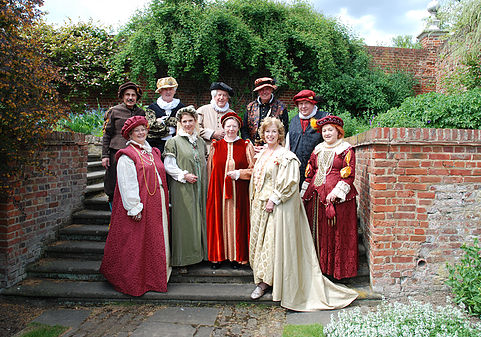 Some pieces will be accompanied by the Mock Tudor Band who will also play instrumental and dance music by Caroubel/Praetorius, Pavan & Galliard and Richard Mico.

The Friends’ Musick is a chamber choir whose repertoire spans over 500 years of vocal music, though their performances in 16th century period costume are always popular.

Founded in 1990, and encouraged by the late Sam Wanamaker (founder of Shakespeare`s Globe), the Friends’  Musick were originally involved in numerous events helping to raise funds and public interest in the building of the Globe, culminating in their performances at the opening ‘Festival of Firsts’ attended by HM the Queen in 1997.  Since then the choir has performed regularly at St Paul`s Church, Covent Garden, in concerts, often with a Shakespearean theme with actors and instrumentalists, as well as other prestigious venues across London and in south-east England.​

An important event in the choir’s calendar is the  ever-popular annual Festival of Nine Lessons & Carols by Candlelight at St Paul’s Church, with the Lessons read by guest actors. 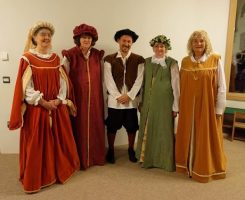 The Mock Tudor Band is a broken consort specialising in music from the 16th to 18th centuries. Our instruments include violins, bass viol, recorders, crumhorns, hautboy, rauschpfeifen and period percussion. We occasionally play short concerts in various venues from churches to pubs! We also run small educational workshops for local primary schools, teaching the children dance, music and period fashions.

He teaches piano and singing, and works as a freelance accompanist.

He continues to study conducting with Joanna Tomlinson and has participated in masterclasses with Joanna and Neil Ferris.

​Other commissions have included building a tin-foil phonograph for the 2016 Camberwell Arts Festival, leading an evening of Baroque drinking songs in a rowdy pub and running a Cockney Knees-Up at the Barbican Music Library.