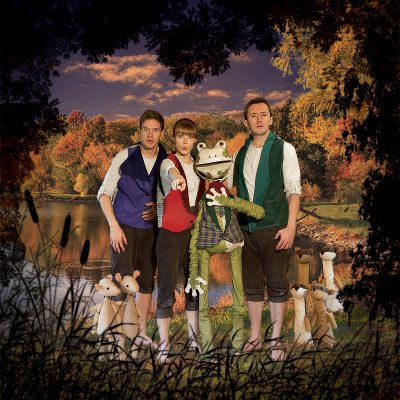 This event will take place in St George’s Church Hall

“Believe me, my young friend, there is nothing – absolutely nothing – half so much worth doing
as simply messing about in boats.”

From the peaceful pleasures of Ratty’s beloved River Bank, to the fearful frights and wicked weasels of the Wild Wood, join Ratty and Mole on their marvellous adventures, along with gruff old Badger and magnificent Mr. Toad.

A beautiful new adaptation of Kenneth Grahame’s much love classic, The Wind in the Willows features unique handmade fabric puppets and a charming original score.

New in 2017, the show was commissioned by the Everyman Theatre, Cheltenham.

Box Tale Soup will transport you into a theatrical world like no other.

Mole comes out of the safety of his beloved home. Tired of spring cleaning he decides to explore. Ending up by the river bank, he meets Ratty (a cultured water vole) and they become firm friends. Ratty shows Mole the joys of the river and their adventures begin. This is the start of Box Tale Soup’s wondrous new adaptation of Kenneth Grahame’s much-loved classic, The Wind in the Willows.

From the beginning, there is a magic about this piece. The music of the original score lures the audience into the world of the woods and river bank with warmth and charm; having a tranquil, Nick Drake-like, quality to it.

The actors are wonderful to watch; totally immersed in their characters and the story telling process. The puppets are nicely crafted; the Amazing Toad is a particularly delightful creation and there is a very imaginative use of headgear to represent various modes of transport, including the shiny cars Toad is so much obsessed by.

The darkness of the wild wood and its nefarious inhabitants (stoats and weasels) are represented well; with the smaller ones in the audience momentarily frightened by their appearance. Thankfully, Mr Badger is at hand, as a reassuring presence.

We regret that these tickets are only available from the Parish Office in St George’s open Monday to Friday 9.30am to 2.30pm.

Receiving great critical and audience acclaim wherever they go, their touring calendar has included: the Lyric Hammersmith, Wilton’s Music Hall and the Wigmore Hall, London; Bridgewater Hall, Manchester; and the Broad Stage, California.

They have had three productions commissioned by the Everyman Theatre, Cheltenham, with the most recent being The Wind in the Willows. We were also commissioned to create a new Oscar Wilde adaptation by the William Andrews Clark Memorial Library, UCLA. We have had the honour of collaborating with world renowned choral ensemble The Sixteen and Guardian Charity of the Year 2016 award winners Music Action International.