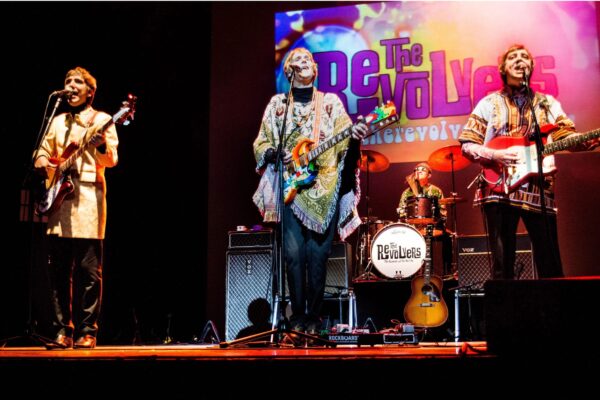 Forming in the summer of 2006, The Revolvers consist of four Young guys with an unrivalled, burning passion for the greatest musical decade of all time….. We are of course referring to the 1960s.

Having played over 1500 concerts, worldwide “The Revolvers” continue to wow audiences with not only their incredible musical talents but also with their unmatched authenticity.

From the meticulously sourced costumes that they wear to the vintage musical instruments that they use, this really is a show not to be missed.

Think back to an era when Rubber Soul and Revolver by The Beatles were high in the charts the Mini was the car to have – as was the skirt – and great music filled with guitars and harmonies could be heard from most radios.

Now come back to the present day – The Mini car has just celebrated its 50th birthday and is still going strong; The Beatles’ albums have just been re-released and The Revolvers are bringing the great music of the 60’s back to life recreating the youthful look and the hits from your favourite 60’s artists

Suited and booted, The Revolvers are an energetic tribute to the lost decade of the 60’s. The Revolvers cover songs from artists such as Small Faces,The Kinks, The Beatles, The Who, Spencer Davis Group, The Rolling Stones and many more….

The Revolvers have performed at famous venues such as The Cavern, Liverpool, Hampton Court, London and have also toured parts of America and Europe. The Revolvers were also recently handpicked to perform at the Premiere after party for the worldwide Premiere of ‘MADE IN DAGENHAM’ in London’s West-End!

‘Absolutely brilliant band…. took me back to my days in the cavern’  Ray Ennis, Swinging Blue Jeans