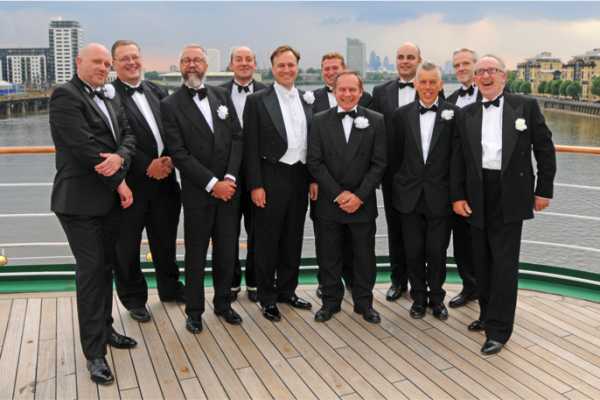 When it comes to authentic swing music the orchestra has no equal. The orchestra performs year-round with a line up of eleven excellent jazz musicians who have perfected their craft and studied jazz at the top conservatories. Many years of working together with top class arrangements, result in the ensemble sound for which the orchestra is renowned. The show is presented in a way that not only showcases this talent, but adds some wit and humour.

Refreshments will be available for purchase during the performance, before it and during the interval.

Duncan Galloway is the band-leader and vocalist, and is also responsible for the musical direction. With a background in theatre and music, Duncan has been part of the orchestra for over ten years. Duncan originally trained in London as an actor at the Webber Douglas Academy. His first experience of Dance band music was in the 1980’s hearing Dennis Potters wonderful TV show ‘Pennies from Heaven’

The repertoire currently comprises over 200 titles of jazz, early swing and dance music from the era, all of these are scrutinised, not only by Duncan, but by the whole Orchestra. Some of the new arrangements are from two of the band members, the trombonist Adrian Fry, and the pianist, Simon Townley.

The Pasadena Roof Orchestra is a world class, unique formation which was created over 40 years ago. It has successfully appeared at major concert houses in London, New York, Dubai, Berlin Hong Kong to Kuala Lumpar. It has recorded more than forty albums. The Orchestra has provided music for films, such as the ‘Comedian Harmonists’ (Josef Vilsmaier,) and completed a soundtrack for ‘Just a Gigolo’ 1980 with David Bowie and Marlene Dietrich (her last film). It has appeared at Buckingham Palace (Christmas party 2010), and its soundtracks have been used in numerous advertising campaigns. The musicians have twice toured the USA to critical acclaim.

It is probably no longer accurate to list the Orchestra nostalgia, as this seems more applicable to the recent phenomenon of tribute bands. The Orchestra has become an established name, in its own right, in a similar way to the great dance bands that inspired it.

The music is a form of modern classic. It stands on the shoulders of giants like George Gershwin, Cole Porter, Irving Berlin, Jerome kern, Ray Noble, Hoagy Carmichael. These were Composers who wrote unforgettable melodies, and sophisticated romantic lyrics. Our tunes are still the all-time standards, the towering achievements of the song-writers art.

Like the great bands of Duke Ellington, Louis Armstrong, Ray Noble, Fletcher Henderson and Jack Hylton, ours are the sound of their era. The music was the back-drop to events of world shattering significance. Take a listen to the sounds that grew out of New York, New Orleans, Paris and Berlin in the 1920’s. Hear to the growling trumpet, the muted trombone, the wailing clarinet glissando over the steady throb of the rhythm section, as the smoky shaft of spotlight picks out the white tux and red carnation of the singer.

When it comes to authentic Dance band/ early swing music, the Pasadena Roof Orchestra has no equal. It has always had access to the finest arrangements, the best musicians, and under the directorship of Band-leader and singer, DuncanGalloway, produces an immaculately presented show, full of fun, rhythm and laughter.