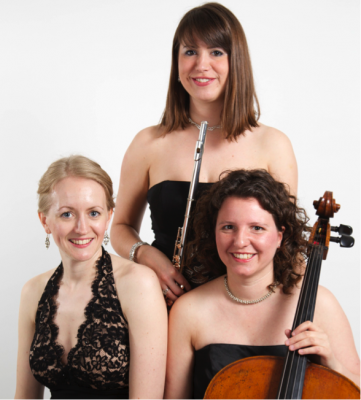 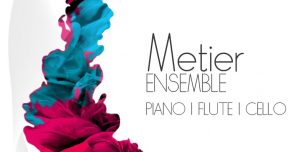 The Metier Ensemble is a flexible flute, cello, piano ensemble. They formed over five years ago after meeting at Oxford University and The Royal Academy of Music where individually they won various prizes and scholarships (including the Worshipful Company of Musicians’ Silver Medal Award, Helen Just and Susan Connell Prize, and the RAM Club Vivien Langrish Prize). In 2011, they were shortlisted for the Park Lane Group Award. A sell-out performance at Haddington Concert Society 2012 resulted in a return invitation in 2013/14, with successful tours to other Scottish music clubs (including Linlithgow, Dumfries, Irvine, Lockerbie, Newton Stewart, Annan). Other recent projects include a three-concert series at The Forge, Camden and performances at Fairfield Halls and St Martin in the Fields. They enjoy busy independent careers alongside the trio, performing at venues including the Wigmore Hall, the Purcell Room and the Royal Festival Hall, and with orchestras such as the Royal Philharmonic Orchestra, and Northern Sinfonia. They have recorded at Abbey Road, for BBC Radio Scotland, BBC Radio 3, and Novello publications.

Through the Metier’s experience, they have developed an ethos that prioritises audience engagement – establishing rapport not only through their performances but also through spoken introductions and personal interaction. They are passionate about programming – sourcing compelling repertoire, and combining solo, duo and trio formats to provide variety and interest to their concerts. Audiences always remark on the refreshing mix of instruments and repertoire and the ensemble actively seek their feedback about any new repertoire they perform. They enjoy combining concert tours with community residencies, coaching and playing with local musicians of all ages. In addition, they are experienced in education work, having led workshops for Aurora Orchestra, English National Ballet, and the Two Moors Festival.

Sophie Rivlin has performed chamber music in major UK venues including Wigmore Hall, St Johns Smith Square and St James’ Piccadilly. As part of the Alea Quartet, she was supported by the Park Lane Young Artists scheme in recitals at the Purcell Room and St Martin-in-the-Fields. The same group won numerous awards and scholarships and played at festivals including Sounds New and Canterbury Festival alongside the Maggini Quartet.  She has recorded for names as diverse as James Macmillan and Rick Wakeman and played with orchestras including the Northern Sinfonia.

Sophie enjoys working with dancers, including Silversmith Dance Theatre, performing at dance venues including The Place and The Richmix. She is also a founding member of the newly formed ‘Troupe’ who produce concerts that tell stories, interweaving music with dance, spoken word and a pop-up museum.

Sophie has much experience of education work, having worked with ENO, the Aurora Orchestra and set up her own choir in India. She trained at the Royal Academy of Music where she gained a distinction under Philip Sheppard and Colin Carr. Previously, Sophie studied Philosophy at Cambridge. In her spare time, she draws cartoons at www.sophiedrawstheline.co.uk.

Claire Overbury is a vibrant flautist, with a strong passion for music and dedication to performance. She has performed many duo recitals in London venues such as the Fairfield Halls, St Martin-in-the-Field’s and St James’ Piccadilly, with pianist Elspeth Wyllie and guitarist Simon Davies. As a soloist, Claire is a headline Classical performer on the Queen Victoria and Queen Mary II Cunard ships and has also performed at both Henley Festival and Latitude Festival. As an orchestral flautist, she freelances for City of London Sinfonia, Sadler’s Wells Ballet and English National Ballet education and is an extra player for The Royal Philharmonic Orchestra.

Claire has a Postgraduate Diploma in Performance with Distinction, from Trinity College of Music, London, where she also received the Worshipful Company of Musicians’ Silver Medal Award. Prior to this Claire read Music at Christ Church, Oxford University, where she held an instrumental exhibition for three years. Claire won second prize in the Anglo-Czechoslovak competition, first prize in the Lions District Flute Competition, and was a finalist in the Eastbourne Young Soloist Competition.

Elspeth Wyllie is based in London and works as an accompanist, chamber musician and private teacher. She has performed throughout the UK and abroad in Spain, France and Switzerland.  With the Orsino Ensemble, performances include Poulenc’s Sextet for piano and wind and Janacek’s Concertino.  Elspeth has also worked for the BBC Symphony Chorus, the National Children’s Choir, and choir master Gareth Malone. She has recorded at Abbey Road, Air and Dean Street studios and for Novello publications.

Elspeth grew up in East Lothian and attended St Mary’s Music School, Edinburgh. She read music at Oxford University and trained at the Royal Academy of Music. She was supported during her studies there by the Oldhurst Charitable Trust and won various prizes, including the Vivien Langrish Prize, Evelyn German Prize and J E Reckitt Award.