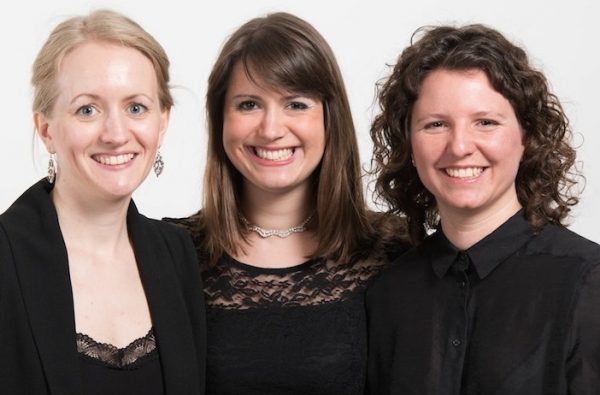 The Metier Ensemble is a flexible flute, cello, piano ensemble.  Their sell-out performance at Haddington Concert Society 2012 resulted in a return invitation in 2013/14, with successful tours to several other Scottish music clubs and an education workshop for local schools.  Other recent projects include a three-concert series at The Forge, Camden, and a week-long residency in Somerset where they enjoyed playing with local amateur musicians. The ensemble now plans to combine concert tours with community residencies, coaching and playing with local musicians of all ages.

The Metier Ensemble formed over five years ago after the members met at Oxford University and The Royal Academy of Music.  Individually, they won various prizes and scholarships (including the Worshipful Company of Musicians’ Silver Medal Award, Helen Just and Susan Connell Prize, and the RAM Club Vivien Langrish Prize).  In 2011, they were shortlisted for the Park Lane Group Award.  They enjoy busy independent careers alongside the trio, performing at venues including the Wigmore Hall, the Purcell Room and the Royal Festival Hall, and with orchestras such as the Royal Philarmonic Orchestra, and Northern Sinfonia. They have recorded at Abbey Road, for BBC Radio Scotland, BBC Radio 3, and Novello publications.  Experienced in education work, the Metier members have led workshops for Aurora Orchestra, English National Ballet, and the Two Moors Festival.

The Metier Ensemble is passionate about programming unique and enjoyable concerts. Audience engagement is a priority, demonstrated through the ensemble’s spoken introductions to the music, and by listening to the audience’ thoughts after concerts. Their use of solo, duo and trio repertoire brings huge variety to their programmes and audiences always remark on the refreshing mix of instruments and repertoire.