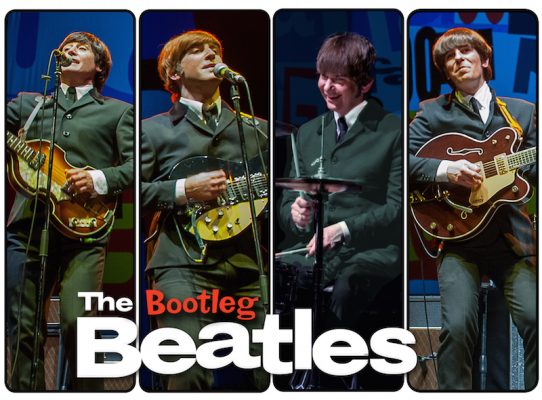 The band’s first performance was at a small student gathering in Tiverton, Devon, England. Following more low-profile gigs, the band performed a 60-date tour of the Soviet Union; further tours followed in Israel, the Far East, the Middle East and India. In February 1984, they were invited to perform in the United States, to commemorate The Beatles’ initial US tour 20 years earlier.

UK success continued to prove elusive. In 1990, The Bootleg Beatles booked 10 shows in cities in which The Beatles had performed in their final UK tour in 1965. Audiences were small but enthusiastic, and another tour was booked for the following year. This proved more popular, and as each year went by the crowds grew, the tours expanded, and the venues got larger. Finally, a gig in Southampton caught the attention of Oasis, leading to the Bootleg Beatles supporting the Britpop band at Earls Court and Knebworth. This gave the band a contemporary audience and increased their credibility, launching them onto the premier European festival circuit and shared stages with Rod Stewart, Bon Jovi, David Bowie, The Corrs, Manic Street Preachers and Iggy Pop.

On 30 January 1999, the band played on the rooftop of 3 Savile Row, London, former residence of the Beatles’ Apple Corps company, recreating the Beatles final public live performance which took place on the same rooftop 30 years earlier. In 2009 the band hoped to mark the 40th anniversary by recreating the performance again, but unfortunately health and safety concerns prevented the appearance.

In 2002, the band played at Queen Elizabeth II’s Golden Jubilee Party at Buckingham Palace.
2010 saw the band headline the Acoustic Stage at Glastonbury Festival, drawing the biggest crowd for 5 years. They also made a number of appearances on BBC television, including The One & Only, The One Show and I’m In a Rock’n’Roll Band.

In March 2011, Neil Harrison announced that he was leaving the group. On 18 July, a press release announced his replacement as Adam Hastings, a musician from Newcastle upon Tyne. It was announced in September 2012 that longtime member David Catlin-Birch was leaving the group. It was announced that they would perform on the acoustic stage at the 2013 Glastonbury Festival.
Andre’s last gig was at Hyde Park in London on 13 July 2014.