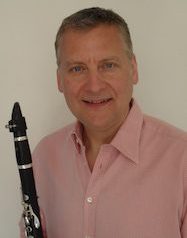 Clarinet Concerto in A K622

Tickets £18, £5 Under 25 are available on-line via this link, The Beckenham Bookshop 42 High Street Beckenham and the Parish Office in St George’s BR3 1AX

Jon Carnac is Principal Clarinet of the SGCO and regularly plays Guest Principal Clarinet with most of the country’s leading orchestras, including the LSO, LPO, Philharmonia, RPO, BBC Symphony and CBSO. As a soloist and chamber musician, he has performed at the Wigmore Hall, Purcell Room, RFH, QEH and 10 Downing Street(!); with ensembles including London Winds, Soloists of the LPO, The Philharmonia and the Belcea Quartet. He frequently broadcasts as a chamber musician and soloist on BBC Radio 2 & 3.