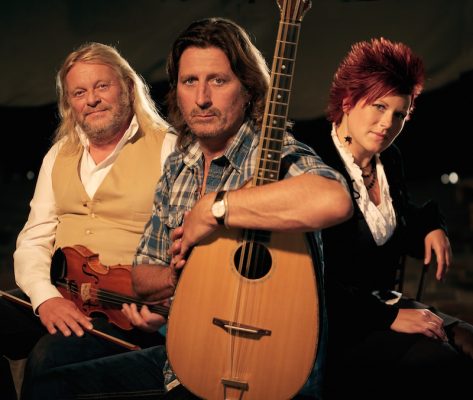 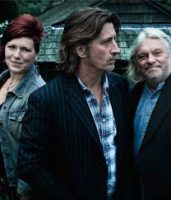 Show of Hands is widely acknowledged as the finest acoustic roots duo in England and as something of a ‘people’s band’ regularly voicing the hopes, fears and life stories of people in song.

Country Life released in 2003 was praised for its “finger on the pulse” topicality about the decline of rural life. It’s title track that went on to be used as a soundtrack by the Commission for Rural Communities in two films.

Voted Best Live Act by the public at the 2004 BBC Radio 2 Folk Awards, the jury is still out on just what kind of music they play. A genre defying mix of rock, roots, blues, country and trad, often influenced by the music of other countries, it is played on an array of instruments from slide guitar to fiddle, mandolin to South American cuatro. They learned to play the cuatro and soaked up new rhythms in the early years of their partnership while working with the exiled Chilean musicians in the band Alianza. It was following this that Steve wrote such memorable songs as Santiago, Armadas and Columbus (Didn’t Find America). Steve, who was described by Mike Harding at BBC Radio 2’s 2007 Folk Awards as “one of England’s greatest singer songwriters”, writes most of the duo’s inspired material. He is renowned for his strong, trademark narrative songs which reflect the escapades, hopes and fears not only of people in his native West Country but beyond, and he pulls no punches when writing highly literate songs about bigger, global issues.

Phil is a dazzling multi instrumentalist, who as the Scotsman observed can “play nearly every stringed instrument known to man” and is much in demand as a session musician. He has his own Phil Beer Band which famously guested on the Rolling Stones Steel Wheels album and Steve Harley’s Poetic Justice.

Together the duo have built up a huge following which has seen them sell out the Royal Albert Hall three times, headline major festivals from Glastonbury to WOMAD and playing all over the world, from Europe to America, Australia and India.

The Autumn 2009 saw the release of a new studio album ‘Arrogance Ignorance and Greed’, produced by Stu Hanna of Megson, and a 37-date tour of every English county town. At the 2010 BBC Radio 2 Folk Awards Steve and Phil received a prestigious double accolade when they were named ‘Best Duo’ and also clinched the ‘Best Original Song’ award for Steve’s punchy ‘Arrogance Ignorance and Greed’ title track which has gone on to be one of the most acclaimed – and continually topical! – songs in the SoH repertoire. 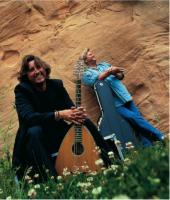 Steve Knightley and Phil Beer met as teenagers while playing in different bands in the Devon city of Exeter where they grew up. They eventually got together and for a short period played in pubs and clubs, even undertaking a disastrous Summer tour of Sweden when they were only 16. As school finished, their lives went separate ways. Steve went to university in Coventry, collected a degree and teaching qualifications and ended up in London playing music in a rock band in his spare time. For Phil the leap to professional musician was immediate. Over the years he played with many different people, including the Arizona Smoke Review and then from 1984 with the Albion Band. In the mid 1980’s, as Steve returned to live in the West Country, he and Phil got together casually to play a few shows. This continued until 1991 when it became obvious that the partnership had the potential to become a full time career. Phil left the Albion Band and Show Of Hands was born.

Unusually their first album was a live one. “Live 92” was recorded at Dorset’s Bull Hotel in Bridport and its excellent reviews helped them break into the festival circuit which lead them to touring with Ralph McTell. It was with Ralph McTell that Show of Hands made their first appearance here 20 years ago in the 1995 Art’s Festival and we are delighted to be welcoming them back again this evening for their 4th St. George’s concert.

Miranda Sykes has been performing with Show of Hands since 2004 when she joined the duo for their Autumn UK tour, which generated the live 22 track double album As You Were. Since then she has augmented their unique sound with her powerful double bass and rich harmonies. In this time the band have moved on from their folk duo image, and evolved into a hard hitting acoustic band, selling out UK and European tours and headlining some of the biggest festivals across the world.

As well as being a superb vocalist and double bassist she continues to surprise audiences with her musical versatility, and demonstrates her ability as a guitarist and interpreter of song, slipping effortlessly between genres.

In 2009 Miranda formed a duo with Rex Preston. In the space of just a few years they have become one of the most sought after duos on the English folk & roots scene.