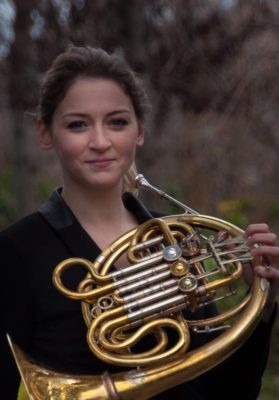 “As the principal horn of the Royal Opera House, Richard Bissill knows exactly how to write music that orchestras love to play.”

“A splendid evocation of a style and era of British (film) music to be treasured.”

In the short time since her appointment she has forged a formidable reputation performing the most demanding horn parts in the orchestral repertoire for the world’s top conductors. She has also appeared as a soloist with the Philharmonia in Britten’s Serenade for tenor, horn and strings.

Born in Exeter, Katy began playing at the age of ten and studied with Sue Dent and later Simon Rayner. She graduated from the Royal College of Music with a first class degree and was awarded the Tagore Gold Medal. Katy served as Principal Horn in the EUYO for two years and undertook further study in Berlin with Christian-Friedrich Dallmann. Katy recently accepted an invitation to join the brass faculty of the Royal Academy of Music and is a professor also at the Trinity Laban Conservatoire of Music and Dance.

Martin Cousin is now regarded as one of the most exceptional pianists of his generation, having been awarded 1st Prize at the 2005 Ettore Pozzoli International Piano Competition (Seregno, Italy) and Gold Medal at the 2003 Royal Over-Seas League Music Competition (London).

Martin has appeared regularly in the major British musical venues since graduating from the Royal College of Music, making his London solo debut at the Purcell Room in 1998. Numerous solo recitals followed, notably at the Wigmore Hall in 2001,2005 and 2011. He has performed as concerto soloist with the London Philharmonic, Halle, Royal Philharmonic, Philharmonia and BBC Concert Orchestras. Performances further afield have included tours of New Zealand, the US, Italy and concerts in Stockholm, Brussels, Toronto, Tokyo, Berne and The Hague.

2006 saw the release of his debut CD of Rachmaninov’s Sonata No 1 and Morceaux de Salon with SOMM Recordings, which was selected as Classical CD of the week by the Daily Telegraph, with Geoffrey Norris stating that, “Martin Cousin’s debut disc establishes a striking new benchmark for the interpretation of Rachmaninov’s 1st Piano Sonata ….. has discretion, judgment, perception and formidable technique.” The US magazine Fanfare added, “This is the performance of the 1st Sonata that I have always heard in my head but never thought I’d actually get to hear with my ears. This guy’s the Real Deal!”

His second CD for SOMM, featuring Glazunov’s piano sonatas, was released in 2010 to great acclaim, with Gramophone stating that the new release is “in every way, an impressive disc” and International Piano remarking “this new disc showcases playing that is both seemingly effortless in its technique and yet utterly natural and sympathetic in its musical narrative and characterisation.”

His latest disc of Rachmaninov’s Études-Tableaux was released in 2014 and was proclaimed ‘a landmark recording’ by The Observer with a 5-star review. Classical Source added, ‘This is one of the best solo piano records I have heard for a very long time – the more so considering it faces some pretty severe competition in the catalogues. Those who do not know these extraordinarily original masterpieces are strongly advised to acquire this disc. There is none better.’
Fanfare Magazine proclaimed, ‘Based on the present disc and on the towering performance of the First Sonata on his debut CD, I am prepared to state that Cousin is among the most distinguished Rachmaninoff pianists of our generation.’

Alongside his solo schedule, chamber music has taken him to Prague, Tokyo, Indonesia and Thailand, Zimbabwe and Barbados and he is a member of the Aquinas Piano Trio.

Martin’s hands are also featured on the big screen in the Oscar-winning film “Shine”, for the scenes involving Rachmaninov’s 3rd Concerto.