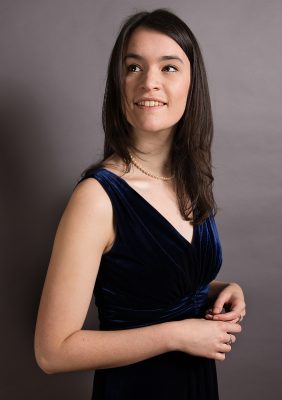 Hailed “a rather special mezzo” (Music Web International), Helen Charlston began singing as chorister and head chorister of the St Albans Abbey Girls Choir. She then studied music at Trinity College, Cambridge where she held a choral scholarship for four years.

A young artist increasingly in demand in the UK and abroad, Helen won First Prize in the 2018 Handel Singing Competition and is a Rising Star of the Orchestra of the Age of Enlightenment for 2017-19. Recent concert highlights include a number of high profile London debuts: Telemann Ihr Völker hört with Florilegium at Wigmore Hall (also broadcast on BBC Radio 3), Schoenberg’s Lied der Waldtaube at Cadogan Hall and at the London Festival of Baroque Music (St John’s Smith Square), singing Storgé in Handel Jephtha.

Helen has often been heard on BBC Radio 3 in live radio concert relays, and as a guest on In Tune. She features on two commercially available recordings released later this year: Bach B Minor Mass (the Orchestra of the Age of Enlightenment/Trinity College Choir for Hyperion), and Bach Actus Tragicus & Himmelskönig sei willkommen (Amici Voices/Amici Baroque Players).

Operatic roles include Olga/Eugene Onegin, Florence Pike/Albert Herring, Ino/Semele, Sara/Tobias and the Angel (Dove) and Dinah/Trouble in Tahiti (Bernstein). Helen created the role of Dido in the premiere of a new chamber opera based on Virgil’s writings about Dido: Dido is Dead, by young composer Rhiannon Randle. In 2017/18 she will sing Messaggera and Proserpine in Monteverdi’s Orfeo for Brighton Early Music Festival and First Witch (Dido and Aeneas) for La Nuova Music at Wigmore Hall.

Lucy Jeal started playing the violin at the age of five.  She attended the Purcell School of Music, the Royal College of Music, the Guildhall and then finished her studies with Almita Vamos at Oberlin Conservatory of Music USA where she received a BMus.

She is currently a member of the English Chamber Orchestra with whom she has played since 2001. She is in demand as a guest leader, playing regularly with Ensemble Reza, the Somov piano trio and the eight piece Salonorchester Baden-Baden.

She has guest-led the Brodsky Quartet with concerts in Rotterdam, Bologna and across the UK and toured with Alfred Brendel, playing Mozart piano quartets in concerts including Carnegie Hall New York and Musikverein Vienna.

She is a former winner of the London Philharmonic Orchestra’s ‘Young Soloist of the Year’ competition and was also chosen for the Countess of Munster and the National Federation of Music Societies’ artists’ recital schemes. 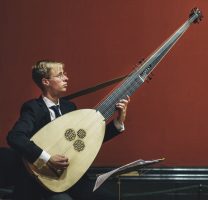 Swedish guitarist and theorbo player Jonatan Bougt is a recent graduate from the Master of Historical Performance at the Royal College of Music (RCM), London where he studied with Jakob Lindberg as an RCM Scholar supported by the Musician’s Company Lambert Studentship. He also holds a First Class Bachelor of Music (Honours) from the RCM having studied for Carlos Bonell and Chris Stell. Jonatan is the first prize winner of the RCM Guitar Prize 2017 and the RCM Historical Performance Competition 2019, having received The Century Fund Prize and The Richard III Prize. In the past year, Jonatan has been selected to the young artist schemes Britten Pears Young Artist Programme and the BREMF Live! 2018/19. Other noteworthy awards include the 1st Prize in the Jörgen Rörby Competition (2014) of the Swedish Guitar & Lute Society and the 1st Prize in the Young Talents Competition of Uppsala International Guitar Festival (2013).

In 2012, he was awarded a scholarship by the City of Stockholm and the Music Conservatoire of Espirito Santo (FAMES) to give recitals with Bougt & Bergek Duo during the XIX Winter Music Festival of Domingos Martins and in Centro Cultural Justicia Federal, Rio de Janeiro. It also led to live performances on Brazilian TVGazeta. Jonatan regularly works as a chamber musician and in 2016, his guitar and piano duo with Irena Radić won 2nd Prize in the Chamber Music Competition at the Twents Guitar Festival, Netherlands and the group Dramma Per Musica are looking forward to performing in major festivals and venues around the UK including the Lake District Summer Festival, Brighton Early Music Festival and St John’s Smith Square in London.

Prior to coming to London, Jonatan studied with Bo Hansson at Södra Latin Gymnasium’s Professional Musician Programme. His studies there were supported by the Royal Academy of Music in Sweden, the Swedish Guitar & Lute Society and the Grisslehamn’s Guitar Prize.

Jonatan plays on guitars by Johannes Kitselis and Lars Jönsson. His theorbo, also made by Lars Jönsson, is generously sponsored by the Helge Ax:son Johnson Foundation.

Jonatan would like to thank the following organisations and individuals for their generous support throughout his career and studies:

Having completed both undergraduate and postgraduate studies in musicology at King’s College, Cambridge, Madeleine Venner went on to further postgraduate training as singer and repetiteur at Guildhall School of Music and Drama, where she studied conducting with Sian Edwards.

While giving frequent performances as soprano and pianist, Madeleine focused primarily on conducting, quickly establishing a fine reputation as musical director in the fields of choral, orchestral and operatic repertoire.

Madeleine has worked with many of the major English choruses, including the Philharmonia Chorus (for whom she was Associate Chorus Master), the BBC Symphony Chorus and the London Philharmonic Choir. She has worked closely with many chamber choirs, including Londinium (for whom she was Musical Director), one of London’s premier vocal ensembles, and has given workshops and masterclasses throughout the UK and abroad.

Madeleine had a long-standing role as Musical Director of St George’s Chamber Orchestra, with whom she appeared at many London venues, including LSO St Luke’s and Cadogan Hall. She has extensive experience in the field of opera, having been Deputy Music Director for Pavilion Opera and Musical Director of Alternative Opera. She was Chorus Master and Assistant Conductor for London Lyric Opera’s Der fliegende Holländer at the Barbican, and Conductor for the same company’s Fidelio and Die Fledermaus with the Royal Philharmonic Orchestra at Cadogan Hall.

In 2008 Madeleine returned to Cambridge as Director of Music and Director of Studies in Music at Queens’ College, where she resumed some of her many research interests.

In 2012 Madeleine was appointed Choral Director of the Hallé Choir.