Richard Digance returns to St George’s to open the 2019 Festival for Beckenham with an Evening of Songs and Celebration supported by Special Guest Eric Sedge.

Richard Digance is a BAFTA Nominated entertainer and a recipient of The Gold Award from The British Academy of Composers and Songwriters. He has also won a Sony Award and is one of only three British folk singers mentioned in The Virgin Anthology of Songwriters for his contribution to comedy songwriting.

He has released 31 albums, written 14 books and has nearly 5 million visits on YouTube. He also composed the songs and music for Bill Bryson’s best-selling Audio CD book ‘The Road To Little Dribbling.’ He has worked in America with movie star Steve Martin and recalls two of his greatest moments as playing The London Palldium with Robin Williams and a guitar duet on TV with Queen guitarist Brian May.

Off-stage he composes soundtracks and incidental music for TV and movies plus audio CD books. 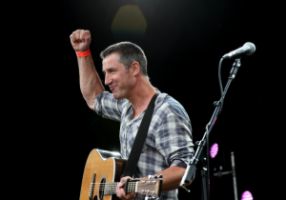 Eric Sedge is a Suffolk born singer/songwriter who first appeared on the music scene as a member of the Broadside Boys. After two successful albums Eric went solo in 2017 supporting Richard Digance on his national tour and releasing his first solo album Pleased To Meet You.

More recently his song Kinder shores, is the title track of a compilation Folk album featuring Ralph McTell, Fairport convention and Show of Hands and he is the creator of the much acclaimed folk musical To Look For America, Co-written with Richard Digance and Tom Leary of Feast of Fiddles and formerly Lindisfarne.

In less than a year he has established himself as a highly regarded songwriter appearing at some of the Countries top festivals including Cropredy.