The Pasadena Roof Orchestra – a Concert for Christmas
Friday 7th December 2018 at 8:00 pm 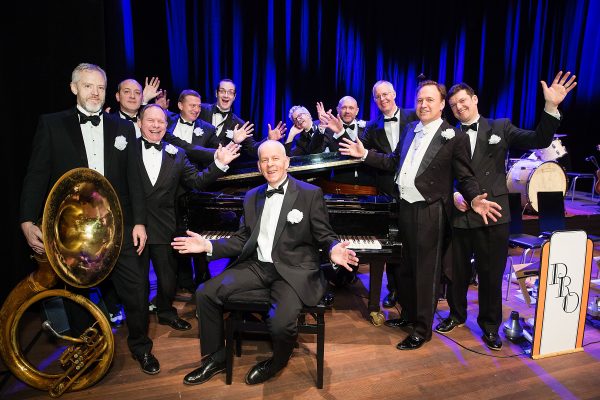 We are delighted to welcome Duncan Galloway and the orchestra back for their third concert at St George’s with a show for all ages, full of laughter, wit and hot dance music from the 1920’s and 1930’s.

On-line ticket sales and sales from the Parish Office are now closed (Thursday 6th December 10.50am).

There will be a further limited number of tickets (between 20 and 25) for sale on the door.

Duncan began his career after training at the prestigious acting school the Webber Douglas academy in London. Music always played a big role in his performing life, and after success in BBC childrens TV (Bodger and Badger, Crosswits, Radio Roo), and an appearance in Noel Cowards Easy Virtue at the Garrick Theatre in Londons West End, the music finally took over.

The first big step in the direction of the big bands, was winning the post as lead singer with the world renowned Pasadena Roof Orchestra. Duncans first concert was in 1989 in Guildford, and since then, he has travelled the world on tour with possibly the worlds most original, and finest pre- war style dance band, founded in 1969 by John Arthy.

His list of credits with the orchestra includes most of the top concert halls in Europe and the USA, plus some venues further afield such as Hong Kong to celebrate the inaugural flight of Emirates Airlines to the city, Kuala Lumpar and Istanbul. At present he is the artistic Director for the Orchestra, presenting the shows, and developing the repertoire of this dance band specialising in music of the 1920s and 1930s. The Pasadena roof Orchestra has no equal in its field.

It’s the Year 1969, a man makes the first step on the moon. The Beatles play their last concert. The first Woodstock happens – and The Pasadena Roof Orchestra gets its licence to swing when over 1000 original dance band arrangements are discovered in an attic by founder-member, John Arthy. But you know that story, don’t you? And the rest – as they say – is history!

For over forty years the Pasadena Roof Orchestra, based in the UK, has delighted audiences allover the world with its mix of swing and hot dance music. The Pasadena Roof Orchestra show includes famous tunes such as ‘Puttin on the Ritz’ ‘Sweet Georgia Brown’ ‘The Lullaby of Broadway’ as well as hot numbers from the twenties such as Duke Ellingtons’ ‘Black and Tan Fantasy’ or ‘Truckin.’ English Dance Bands are also included, with the beautiful numbers that were sung by Al Bowlly, and arranged to perfection by Ray Noble. The show is far from a pure history lesson as audiences can testify; there is a liberal dose of‘British humour’ in its presentation. When it comes to authentic swing music the orchestra has no equal. The reputation of the orchestra is as legendary in its own right, as the bands from the 1920’s and 1930’s that inspired it.

The orchestra performs year-round, with a line-up of eleven excellent jazz musicians who have perfected their craft and studied jazz at the top conservatories. Many years of working together and top class arrangements, result in the ensemble sound for which the orchestra is renowned.