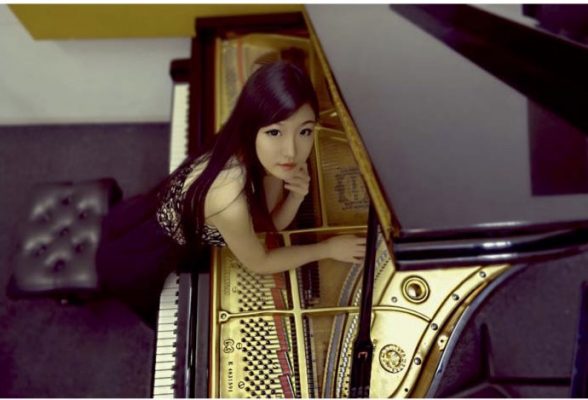 César Franck   Sonata for Piano and Violin in A Major

All proceeds will go to St. George’s Church

Tea and coffee will be served from 4.15pm 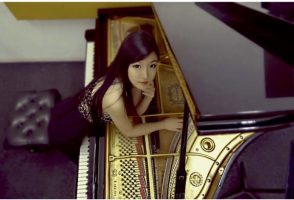 Young talented Pianist. Yun (Sunny) Li, started learning piano at the age of four. She had her first public performance in China at the age of six. She won the first prize of “Chinese Talented Pianist Competition” in 2003, and won the “Golden Star Competition of China” in 2007. She played in International piano festivals while studying at the Chinese Conservatory of Music. In 2008, she played solo concerts in Beijing Concert Hall and Dalian Richard Hall.

She was offered multiple scholarships from Birmingham Conservatory, Royal College of Music, New England Conservatoire and Manhattan Conservatory in New York. The Royal Academy of Music was her choice, as she studied with Professor Carole Presland and subsequently in Master of Performance at the Royal Northern College of Music, where she studied with Professor Paul Janes. In 2011 she completed her postgraduate degree of Music Business in Point Blank Music College in London. She has recently done her Artist Diploma in Trinity Laban Conservatory. Sunny also had lessons and master-classes given by many well-known and inspiring pianists such as Daniel Barenboim, Vladimir Ashkenazy, Christopher Elton and Mitsuko Uchida, etc.

In 2009 she played Beethoven No.1 Concerto with London Orchestra. In 2010 she played solo concert invited by Richard Piano Company in Dalian broadcast and she was printed in the China Daily Newspaper. In the same year she also performed with famous singer Karlene Hayworth in London for the Christmas Opera concert. Sunny was invited to classical music club private Italian event and performed with world famous pianist Lorenzo Di Bella. Sunny recorded her first piano solo album in 2011. She had concerts in UK with her best chamber partner violinist Maria Orguren in Wigmore Hall which is one of the best concert halls in London, also duo concert with AJSW (Anglo-Japanese Society of Wessex). In July 2013, Sunny signed with BFSU Omnibrain for youth-as-image speaker performance in China. Sunny is also a wine taster as she got the WSET (wine spirit education test) certificate, and played chamber concert in the public wine event in August 2013. In November that year, she was invited to Montblanc private event with pianist Langlang. She also play solo concert in NPL music society regularly in London. In September 2014 she played concert with Chamber Music Group, The Migjorn Quartet and had master classes with famous violinist Petr Prause, Peter Cropper and pianist Jiri Vodicka. In March 2015, Sunny won the concerto competition in Royal Northern College of Music. She was also invited by the Royal Over-seas League and played for the royal members, with Marimba and 2 Pianos with percussionist Le Yu in Alexzandra Princess Hall. Sunny is one of the Steinway artists in Munich Germany, and had recitals with pianist Assel Abilseitova in Steinway Haus, Rubinstein Hall. She was requested the pleasure of the company for the visit of First Lady of China Madame Peng Liyuan when Chinese president Xi Jinping visited U.K. in October 2015. She also played in Royal Albert Hall in March 2016.

Sunny signed with German Progressive-Arts Records Company. On June 2016 Sunny released her new album Sunny Li Piano on Spotify, google music, Amazon and iTunes, later she was interviewed by Classic Finland, Sino Radio London and GB Times. Her piano video has been posted by Classic FM, with over a million views. <Sunny Li Piano> is now also released in China on Baidu music, Duomi, QQ Music, Kugou Music, etc. Sunny recently signed with Quite Great Music Company. They will be releasing SunnyLi Piano new album in 2017 and will be aiming to make her a household name in the U.K. as they believe she is brilliantly talented and were truly impressed with the awards she won in China. They recognize Sunny Li has a unique style that enchants those who see and hear her and trust that she will help to broaden the scope of classical music to younger audience appreciating her style and image as well as her talent for playing the piano. Quite Great only offers exceptionally talented artists the chance to release their music on the Palila labels and are honoured to work with SunnyLi Piano. Over the next few months the company’s aim will be to get media coverage for Sunny Li in major magazines such as Gramophone through to radio outlets such as Classic FM and Radio 3. As it’s founder Pete Bassett explains: “We were mesmerised by the way Sunny Li performs and the beautiful technique she has developed thanks to her training both in China and the U.K., we look forward to making her a major force in classical music over the next 12 months and beyond.’

Dutch-Swiss violinist Jesper Gasseling (*1991) plays on a rare 400-year-old violin “The Bolshoi” made by Giovanni Paolo Maggini around the year 1600, which he received on loan by a German foundation. He is part of the European Union program European music talents that supports six soloists in developing their career. As a soloist, Jesper appeared in performances of violin concertos by Peteris Vasks, Tchaikovsky, Bach, Vivaldi, Haydn and Mozart and played at venues such as Kings Place and Blackheath Halls London, KKL Lucerne and Mozarteum Salzburg. In 2017 he was part of a New Year’s concert tour to China with the ‘British National Symphony Orchestra’, taking him to some of to the most important concert halls of the country, including Shanghai and Beijing’s “Great Hall of the People”.

Jesper performs regularly in chamber music recitals. Current projects include a CD recording of Cesar Franck’s violin sonata with his duo partner, Chinese pianist Sunny Yun Li, in London. Starting in 2017, he will be the artistic leader of his own chamber music series in Switzerland.
Following a successful audition, Jesper is engaged as a concertmaster with orchestras such as Trinity Laban’s Symphony Orchestra and Opera Orchestra and the Shapeshifter Ensemble London in big symphonic works, as well as in violin concertos, leading from the solo violin. He recently founded the ‘London Meridian Players’, a string chamber orchestra, which he leads from the first violin desk as their artistic director.

In his teens, Jesper was accepted into the young talent scheme of the university for music in Lucerne (Switzerland) at the age of fifteen, where he obtained his Bachelor degree studying with Daniel Dodds. He went on to study with Russian violinist Boris Brovtsyn at the prestigious Trinity Laban Conservatoire in London, where he finished his exams with the grade ‘With Distinction’. Currently, he is finishing his Masters degree in Lucerne with Daniel Dodds. Other mentors include violinists like Isabelle van Keulen and Keiko Wataya (Mozarteum Salzburg), Shmuel Ashkenasi and Hansheinz Schneeberger, pianist Deniz Gelenbe and conductors Jonathan Tilbrook and Jessica Cottis.