An afternoon of Classical Music compered by Peter Jones and performed by a number of our regular St George’s Friday lunchtime and Saturday Coffee recitalists. 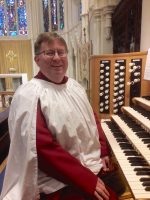 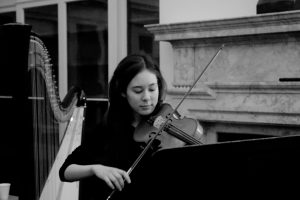 Julia Hart is currently studying with Michal Cwizewicz, having previously graduated with a Masters from Trinity Laban Conservatoire of Music and Dance in London. At Trinity she was a TCL and Len Smith & Felicity Young Scholar under the tutelage of Diana Cummings.  Before entering Trinity she studied with Eszter Boda-Katona.

Julia’s greatest passion is chamber music, and she enjoys working with a variety of musicians in different settings. Her recent recitals with pianist Saki Matsumoto took place at Kuki Cultural Centre in Saitama and the Sonorium in Tokyo, Japan. She has performed with guitarist Karen Yeung at Ripley Arts Centre and St. Matthew’s Westminster, and saxophonist Stephanie Legg at pop-up cafes, department stores, family events as well as in London churches. In a string quartet, she has received masterclasses from the Carducci, Wihan and Brodsky Quartets and performed at various churches in London, the Undercroft Theatre in Eastbourne, as well as hosting workshops for children in primary schools and Saturday music centres.

Julia believes that through exploring a piece, one encounters a never-ending stream of possibilities in both musical style and expression. The accompanying stimulation and challenge give her a reason to believe that the art of performance is a lifelong project. 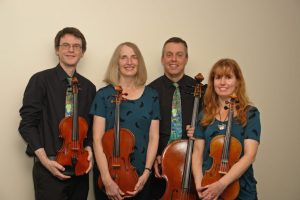 Clare Morgan started piano lessons at the age of 5 and at age 13 became a Junior Exhibitioner at the Royal Academy of Music. She was educated at Tunbridge Wells Girls’ Grammar School and, on leaving there, became a full-time student at the Academy, where she studied Piano and Viola, gaining the GRSM (Hons) and LRAM diploma. Since then, Clare has been much in demand as an accompanist for singers and instrumentalists locally and further afield. This she has combined with administrative work within musical organisations, including the Royal College of Music and most recently St Paul’s Cathedral School. She has been a member of St George’s Choir since moving to Beckenham in 2002 and also does occasional instrumental teaching. 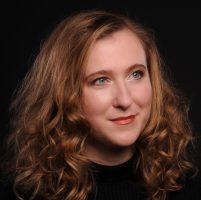 Martin Sharpe studied piano at the Royal College of Music as a Junior Exhibitioner where his teacher was John Barstow. Whilst there he made a broadcast for BBC radio performing works by Beethoven and Debussy.

Martin went on to pursue a career outside music, working in Whitehall; but he has continued to perform regularly at local concerts as a soloist, accompanist and duettist. He is currently chairman of Bromley Music Makers where he enjoys providing performance opportunities in London and elsewhere for the club’s student members from national music colleges.