Mickie Driver & Company offer their 100th Birthday Tribute to The Forces Sweetheart with the music of David Carter.

A talented cast take you on a trip down Dame Vera’s personal memory lane of music – from her first professional engagement at the age of 7 to topping the charts with a CD at the age of 93.

Dame Vera Lynn is a much loved, iconic entertainer who helped to keep up the spirits of men and women in the Services and those on the Home Front through the dark years of World War II.

Form the age of seven she sang in Working Men’s Clubs and from the age of twelve took up singing as a full time profession.

This Centenary Tribute covers her early life and career, through the Big Band Era, and the War Years, and then on to the Televison Specials so loved in the 1970s.

It recalls her tour through the Burmese jungle to entertain the troops, her BBC programme ‘Sincerely Yours’ and the Daily Express poll of Brisitsh Servicemen to name their favourite entertainer, in which they chose Vera Lynn, and from when she became known known as ‘The Forces’ Sweetheart.

It tells of Dame Vera’s kindness to up and coming entertainers – Joan Regan and Norman Wisdom both prouldy told of the help and advice they received. Her Charity work, especially that for children with Cerebral Palsy is also recognised in the show.

The highlight of “Yours” is a message from Dame Vera herself. recorded just after her 99th Birthday.

Mickie Driver is a professional variety entertainer working mainly in a pearly suit, specialising in Music Hall and songs from the years of WWI, WWII, the 1950s and 1960s.

He also heads Variety Collective providing entertainers for older audiences, and Variety Lunches (a lunch followed by a themed show) at venues in Dartford, Wood Green, Margate and Broadstairs. 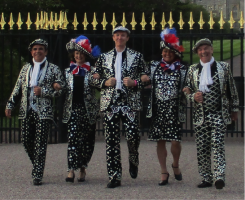