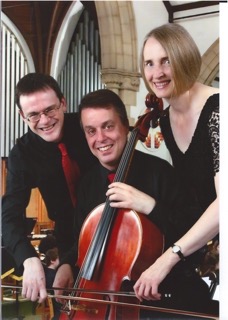 Members of the Hammig String Quartet

THE HAMMIG STRING QUARTET was formed in 1989, taking its name from the violin-maker Wilhelm Hammig (1838-1925). Over the years the quartet has given many recitals across England and Wales and has made several visits to Leichlingen, Germany. They have been frequent performers at St George’s, Beckenham in both the Friday lunchtime and Saturday morning Coffee Concert series, and for other special events and services.

Recital venues have included Concord College Shropshire, the Usher Art Gallery Lincoln, the Atheaneum Bury St Edmunds, and the Colour House Theatre at Merton Abbey Mills, London.  They played at Penn House Amersham for the National Society for Epilepsy, and performed as part of the ‘Rochester 1400’ celebrations. Since 2005 they have participated in annual fundraising Celebrity Christmas Carol Concerts for the Cystic Fibrosis Trust at Odiham, and they have given several fundraising recitals for the Beckenham and Borders branch of the National Childbirth Trust. They have played at St Martin in the Fields with the Bromley Boy Singers in their New Year’s concert, and in several concerts for the South London Singers. In February 2010 they were invited to join Keziah Thomas for a joint quartet and harp concert in aid of the Roumanian Aid Foundation. In May 2011 they played Shostakovich’s 8th quartet in a lecture recital given by Anna Davis at the St George’s Arts Festival. More recently the quartet has given recitals at St Anne and St Agnes Gresham Street, St Alfege Greenwich, St Mary’s Bromley, the River and Rowing Museum Henley on Thames, St Mary’s Balham and St Katherine’s Knockholt. In February 2014 they played at the Mansion House for the Gardeners Livery Company Banquet, in the presence of Prince Edward, and again in February 2015.

Paul Collen, who played violin with the Hammig string quartet for over twenty years, died in October 2013 following a short fight against cancer. Since then the members of the Hammig Quartet have been exploring new repertoire including string trios and piano and oboe quartets.