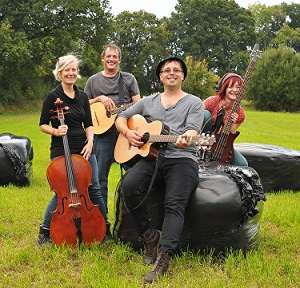 After two years in the making, King’s Gambit are proud to present their new album, ‘From One to Another’. The band’s biggest, most-accomplished effort yet, ‘FOTA‘ is a celebration of the English folk tradition, taking listeners on a foot-stomping journey from start to finish.

Both the band’s spirit and Chris Startup’s lyrical eccentricity come to life against a rich musical backdrop whose warmth and charm will stir even the most dormant of souls and appeal to young and old alike.

A lively album that will have you dancing and conversing till the wee hours of the morning, ‘From One to Another’ is a maturation of the group’s distinctive sound, reaching out to like-minded people across the UK and beyond.

“Our first two albums were quite exploratory and, looking back, represent a sound still in progress,” explains Chris. “‘From One to Another’ feels like the full picture we’ve been working towards for half a decade. It captures who we are and what we do as a whole.

So I think it’s time to party again!”

From One To Another (own label)

If you take away the rock excesses of folk-rock you’re left with Northampton’s King’s Gambit – a band that rocks acoustically while still capable of musical delicacy. I don’t like to make comparisons but they have something of the style and drive of CC Smugglers. From One To Another is their third album, all original material written by Chris Startup – give or take what he’s done to ‘St. James Infirmary’.

Chris, who is also lead vocalist, plays guitar and harmonica; Katie Paton plays bass; Helen Turton plays cello and Andrew Higgins provides the top notes on mandola, mandolin and banjo. All four sing making for solid harmonies and raucous backing vocals. Chris’s songwriting subjects are varied. ‘People Versus’ is about a pub fight and is reminiscent of something Robb Johnson might come up with in a lighter moment. ‘Mary Jane’ is a drug-fuelled dream but also about the loss of precious environment, a subject he’d already addressed in ‘The Only One’ in a very different context.

He describes ‘Into The Rolling Sea’ as a good ‘ol drinking song but it’s more about the aftermath of too many good ‘ol drinks. The opener, ‘A Maiden Fair’ has the feel of a traditional song, albeit one introduced on harmonica, while being firmly set in the present day and, like all Chris’ lyrics it leaves you with something to chew over later.

There are three instrumental tracks. The first, ‘Charles Baker’, features Andrew with support from Chris Hewett’s guest accordion but the thing that struck me all the way through the album is the role of the cello. Helen happily plays a lead part sometimes but her key job is holding the middle of the musical register with fills and counter-melodies. Katie keeps the beat solid in the absence of drums and even gets a bass solo on the closing title track.

This is an album that I liked from the off and then grew on me.

A band that rocks acoustically while still capable of musical delicacy

King’s Gambit is a party-loving contemporary English folk band, writing and performing original tunes filled to the brim with melody, spirit and banging beats to dance to!

Based in Northampton, the quintet has been thumping out its own unique ‘folkbeat’ sound in towns and fields throughout the country since 2010, persuading the people of sweet England to DANCE!

Whilst raising the roofs of pubs and clubs across the East Midlands, the group has also increased its presence on the UK festival circuit, delivering lively sets at popular revelries such as Alchemy Festival (Lincolnshire), Green Meadows Festival (Peterborough), Something Else Somewhere Else (Oxfordshire) and Family Pride Festival (Staffordshire).

“Huge thanks to the revelatory King’s Gambit for a powerhouse opening set that just blew everyone away”  Kontra Roots Club, Northamptonshire

“An exciting and energetic acoustic band, full of energy with a new take on folk. Guaranteed to have you tapping your feet”  Brackley Folk Club, Northamptonshire

Furthermore, the band has taken its jaunty racket and stirring ballads to the heart of north London as well as Poitiers, France, and Marburg, Germany, winning over new audiences and picking up fans from all walks of life.

With three self-released albums now under its belt (2011’s Lines and Verses, 2013’s Folkbeat and 2017’s One to Another), Live dates throughout the shires keep rolling in and the pilgrimage of grooves, jigs and rollicking good times continues!

Other festivals across the UK and Europe including: