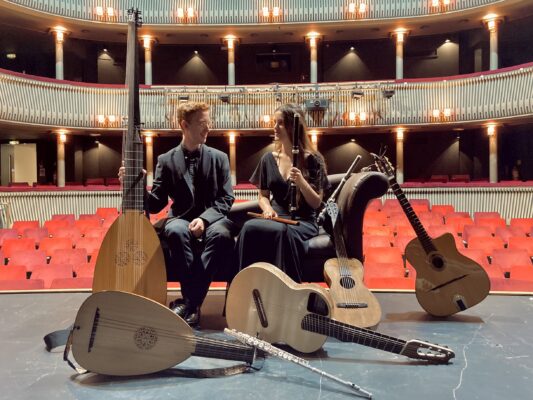 After first collaborating at the Royal College of Music, Beth Stone and Daniel Murphy founded the Flutes and Frets Duo in March 2021. They are an upcoming, unique ensemble passionate about showing the versatility of the flute and plucked instruments combination. Fundamentally, their aim is to play all types of music on the instruments they were originally composed for. They achieve this by exploring a wide scope of repertoire ranging from renaissance all the way through to contemporary.

As current students enrolled in the historical performance department at the Royal College of Music, they are devoted to keeping primary sources at the core of their historically-informed approach to performance practice. They enjoy exploring a huge spectrum of repertoire including much underrepresented music and also arrangements of more well-known works.  Another central part to their objective is expanding the repertoire for flutes and plucked instruments by arranging music that hasn’t yet been published for this combination and by commissioning new works.

The Flutes & Frets Duo have had the pleasure of performing numerous recitals in various locations including London and Norfolk. Notable concerts include the London International Early Music Festival, Lichfield Young Artists Concert Series and performing at The National Gallery, London. They were thrilled to be awarded the first prize for the 2021 La Follia Nuova International Chamber Music Competition.

One of the main aims of the duo is to bring awareness to diverse audiences of the wide possibilities that this combination of instruments provides and also the variety of sounds that composers of every era would have intended their audiences to hear. Through this, they produce a completely different sound palette through combining historically-informed performance with modern conventional performance. 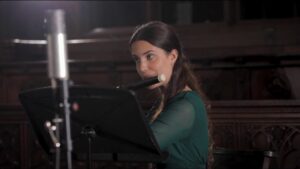 Beth Stone started playing flute at the age of six, studying at Chetham’s School of Music from age eleven with Rachel Forgrieve. In 2015, she took an interest in historical flutes and started studying with Dr Martyn Shaw. Currently, as an Ian Evans Lombe Scholar at the Royal College of Music she studies modern flute with Gitte Marcusson and historical flutes with Rachel Brown as part of the joint principal course.

As an avid player of all flutes from renaissance all the way through to modern flute, Beth has been able to perform in many orchestral settings. She is currently the principal flautist of the Young Musicians Symphony Orchestra and the London Baroque Orchestra. She has had the pleasure of also working with the Academy of Ancient Music; Cambridge Handel Opera Company; Britten-Shostakovich Festival Orchestra; London Choral Sinfonia among others. From 2017, she had the privilege of being a member of the National Youth Orchestra of Great Britain for 2 years in which she performed in the BBC Proms, toured the UK & performed in the Berlioz Festival in La Côte-Saint-André, South France.

Chamber music has always been a big part of Beth’s music making. She is member of many chamber groups including The Flutes & Frets Duo, Lumas Winds, Grand Siècle (on historical flutes) & Ensemble Matters which has enabled her to travel internationally including Norway and France.

Beth was honoured to receive the RCM 2021 McKenna Prize for the highest end-of-year recital mark in a baroque instrument. She is also the recent winner of the RCM Flute Prize 2021, the second prize of the RCM Contemporary Competition and the Third Prize Award of Samnium University’s International Orchestra Auditions Awards. Her recording of Telemann’s 9th Fantasia was chosen to be included on an Oboe Classics CD as part of the Telemann Fantasia Recording Competition. She currently plays on a Powell flute head joint that she won at Paul Edmund-Davies’ Summer Course. 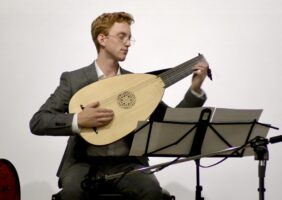 Daniel Murphy studied Classical Guitar at the Junior Guildhall Music Department for 4 years with Mark Eden and Matthew Robinson. He then started his Undergraduate studies at the Royal College of Music studying Classical Guitar with Carlos Bonell. During the first two years of his degree, he gradually transitioned to the historical performance department and in his third year, he became RCM’s first ever undergraduate principal-study theorbo player, studying with Jakob Lindberg.

Daniel has participated in masterclasses with Jacob Heringman, Elizabeth Kenny, David Miller & Lynda Sayce. Within the RCM, he has taken part in many ensembles including the Baroque Orchestra & Broken Consort and has accompanied numerous singers. Highlights during this time include playing a concert on Radio 3’s Early Music Show in Windsor Castle and playing Continuo in the RCM’s production of Handel’s Rodelinda.

He has also performed with groups outside the RCM such as Fiori Musicali, Norwich Baroque and Dowland Works. As a lutenist, he performs lute song with numerous singers including Emma Kirkby and Mary Bevan. Upcoming concerts include a much delayed performance of Monteverdi’s 1610 Vespers in Venice as a member of the Taverner Consort, conducted by Andrew Parrott.