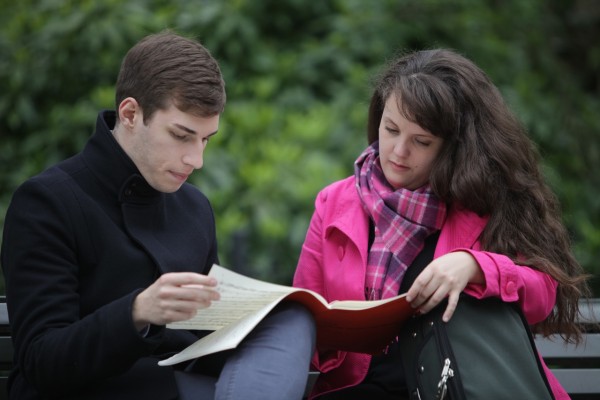 Duo Asteria, Corinna Hentschel (violin) and Giulio Poggia (piano), are making a return visit to St. George’s to play a programme of music for violin and piano.

The recital will last about an hour.

Tea and coffee will be served from 4.15pm

Duo Asteria was born in February 2015, almost by chance, by the desire of two young musicians Corinna Hentschel and Giulio Poggia, who met while studying at Trinity Laban, to make as much chamber music as possible. From the outset there was an obvious mutual musical and personal empathy between the two musicians.

They have created and played demanding recital programmes in many different venues, including the Wigmore Hall (as part of Trinity Laban chamber music project), the Polish Hearth Club in Kensington, St James’s Paddington, The Old Royal Naval Chapel at Greenwich, St Peter’s Church Notting Hill and here at St George’s.

Giulio and Corinna are very fortunate to have Derek Aviss OBE and Ofer Falk as their mentors and to have had the opportunity and experience of working with Tasmin Little in a performance masterclass.

As well as giving this recital in St. George’s Festival for Beckenham other engagements for 2016 include a performance at St Martin in the Fields, where they appeared in the 2015/16 Lunchtime Recital Series.

The duo are in demand to perform regularly around the UK and Germany .