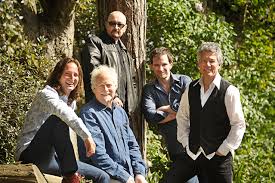 Rod Stewart’s guitarist and collaborative songwriter and his band tour the UK.

Formed by Rod Stewart’s guitarist and collaborative songwriter, Jim Cregan, Cregan & Co. celebrate the years from 1977 to the present day with an evening of Rod’s hit songs.

Former Family and Cockney Rebel guitarist Jim joined Rod Stewart’s band in 1977 and became his musical director, co-producer and co-writer. Cregan co-penned many hits with Stewart, including Passion, Tonight I’m Yours (Don’t Hurt Me), and Forever Young. Jim is a world class guitarist and has written for many rock and pop stars (Rod Stewart, Joe Cocker, Art Garfunkel, Steve Harley, Katie Melua & most recently Lulu)  and his co-write Brighton Beach on Rod Stewart’s last album Time was released as a single and continues to have masses of airplay on BBC radio.

Come and listen to the stories and share in the music that has formed the soundtrack to many of our lives for more than 30 years!

“If you can’t afford my ticket, go see these guys – they’re just as good and half the price!”
– Rod Stewart

Best known for his work with Rod Stewart, Jim co-produced, co-wrote and was Rod’s musical director for nearly 2 decades.

His songs have also been recorded by Joe Cocker, Willie Nelson, Kid Rock, Russel Watson amongst many others, and he has played on stage with guitarists Jeff Beck, Frank Zappa, Pete Townsend and Chuck Berry. Oh yes and Tina Turner, Elton John, Cat Stevens and Katie Melua to name a few!.

He has received over 40 gold & platinum records to date, and his guitar solo on Cockney Rebel’s “Come Up And See Me (Make Me Smile)” still sounds alright!

Ben was awarded a platinum album for his debut  release which charted at number 3 in the official UK album charts. Equally at home on both guitar and piano he has worked with musical legends Tony Bennett and Barry Manilow, written songs with Mark Owen (Take That).  In 2006 Ben reached the final of The X-Factor alongside Leona Lewis, winning accolades from Simon Cowell for his gravelly, soulful voice.

Ben has his own band and performs all over the world.

Best known for his work with “Thunder”, Harry James is one of the best-loved drummers on the rock circuit. With over 40 years’ experience of performing live harry is renowned for his distinctive and powerful playing style and rapport with the audience. Harry proudly occupied the drum stool for Magnum and is also seen with “Snakecharmer” featuring Micky Moody, Neil Murray and Laurie Wisefield. In addition to his extensive Thunder back catalogue and recent Magnum albums, Harry has contributed to work by Don Airey, Russ Ballard, “Shadowman” (featuring FM’s vocalist Steve Overland and Heartland’s Steve Morris), Carl Sentence, Bucket & Co and Hellfire Corner. Harry has had the pleasure of performing live on stage alongside Ian Gillan, Roger Glover, Jon Lord, Glenn Hughes, Ian Paice, Don Airey, Steve Harley, Roger Daltrey, Lulu, Paul Young, Graham Bonnet, Don Airey and Mick Ralphs amongst many others.

Pat Davey (Bass)​A master of both electric and upright bass, Pat is always in demand as a session musician and live performer. He has toured the world  with Paul Young, The Tom Robinson band, Zoot Money, Jason Rebello and Rumer, as well as jazz greats like Ronnie Scott, or vintage rockers like pianist Roy Young.

Pat has lectured at the Bournemouth College Of Music and is at home with all styles. His contribution to Cregan & Co is enormous, with his effortless groove and superb musicianship.

Sam is also an accomplished singer/songwriter and is the front man of popular uk-based funk-soul band “Brother Strut”, who receives 10/10 reviews from Blues & Soul Magazine, with a debut album that has topped the iTunes chart.