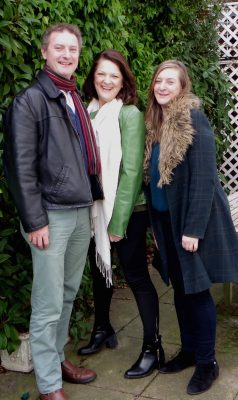 A programme of songs and duets about journeys, wandering and homecoming by Vaughan Williams, Schubert, Britten, Mahler, Duparc, Ireland, Wolf and Flanders & Swann performed by:

Full programme detail to be announced

Antonia Cviic studied music and drama at Royal Holloway, University of London, where she was a choral scholar. Further training followed at the Royal College of Music and Morley College Opera School. Her operatic roles include Donna Elvira and Donna Anna (Don Giovanni), the title role in Suor Angelica, Gutrune (Götterdämmerung) Lady Billows (Albert Herring) and Elisabetta (Maria Stuarda). Antonia has also been developing her abilities as a writer and creator of imaginatively themed programmes of classical repertoire, something she has enjoyed putting into practice in all her appearances at St George’s, Beckenham. In July, she will take the title role in Iolanthe at the New Malden Festival.

Stephen Cviic cut his musical teeth as a boy treble and orchestral flautist. After a career in journalism, he changed track and is now pursuing solo singing. His operatic roles include Don Jose (Carmen), Tamino (Die Zauberflöte), Macduff (Macbeth), Pong (Turandot), Spoletta (Tosca), Grimoaldo (Rodelinda) and Frederic (The Pirates of Penzance). He loves solo concert work and has appeared in works including Handel’s Messiah, JS Bach’s Christmas Oratorio and Mozart’s Requiem. He is a member of one of London’s top chamber choirs, the Elysian Singers. In late June and early July, he will be appearing as Orpheus in Orpheus in the Underworld with St Paul’s Opera in Clapham.