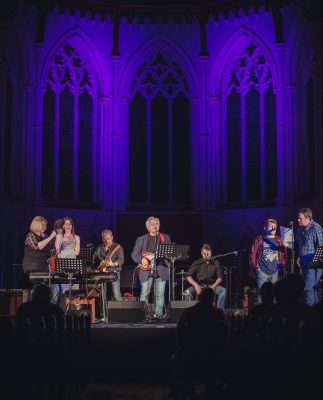 Changing Tunes performers are joined by special guests Benny Gallagher, Bob Wood and Jessica Lee Morgan for this concert in aid of The Changing Tunes Charity. The charity helps offenders and ex-offenders through music. The performers bring you the music and the stories which have re-built the lives of offenders and ex-offenders. Listen and believe in the power of music to transform. 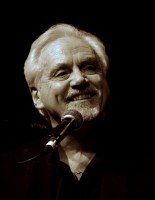 One half of the legendary Gallagher & Lyle, Benny has written more great songs than seems really fair. He remains one of the best players on the circuit. For sheer quality and distinction you need look no further than the career of Benny Gallagher. One half of hit makers and blue chip songwriters Gallagher & Lyle; he began his career as a staff writer with the Beatles Music Pub. Co. Apple writing songs for lifelong friend and Apple Records biggest Solo Artist Mary Hopkin. Benny has always considered his early years at Apple, and, especially, the constant encouragement of Paul McCartney, as one of the most important factors in his development as a songwriter. A huge number of artists have recorded and released Benny Gallagher songs including Bryan Ferry – Don Williams – Elkie Brooks – Fairport Convention – Garth Brooks – Phil Everly – Ricky Nelson – Ringo Starr – and Simon and Garfunkel. But the big news was that in 2010 Benny released his first ever solo studio album – “At The Edge Of The Wave” and that it’s every bit as good as his previous work. Featuring a top band of musicians and including a marvellous homage to the late, great Ronnie Lane (Dream On) the CD has attracted a great deal of public and media attention, including being selected as BBC Radio 2’s disc of the week.

Jessica Lee Morgan is a singer and songwriter raised on a wholesome diet of folk and rock. Her on-stage style is honest yet playful, with songs and a voice that come from the heart.

Born to Welsh singer Mary Hopkin and American-Italian producer Tony Visconti, a musical career was inevitable but Jessica has also worked in fields such as health and social care, with people from all sorts of backgrounds, and this reflects in her songwriting.

Live, she performs mostly with Christian on bass and her acoustic guitar, with percussion strapped to her army boots.

All Jessica’s own writing, new album ‘Around The Block’ is a return to her acoustic roots. Jessica sings, plays guitar, saxophone, ukelele and kazoo. She is supported by Christian Thomas on bass and Simon Adams on drums and percussion, with guest appearances from her brother Morgan Visconti, Paul Cuddeford and Jules Hay.

‘Around The Block’ is a completely acoustic album. This is in contrast to her previous album release ‘I Am Not’, which is an eclectic mix of acoustic and electronic music. Jessica co-produced the new album with partner Christian Thomas, who recorded and mixed the album.

Jessica said “I wanted to have a more organic feel to this album. I felt that I wanted to break away from the rigid formality of a studio album, so wherever possible, we recorded in different places. Most of the guitars were tracked in our mobile recording studio in an orchard in Ross on Wye, and the saxophones were recorded on the A470 to Brecon!”

The album ends with ‘This Is My Love Song’. Originally an electronic track on I Am Not, this live version was recorded on tour in the USA and features Christian, Morgan, and Tony Visconti on backing vocals.

Jessica also tours with Bowie supergroup Holy Holy alongside her father Tony Visconti (Bowie, T.Rex), Woody Woodmansey (Spiders from Mars) and Glenn Gregory (Heaven 17), as well as Paul Cuddeford, James Stevenson and Berenice Scott. They have toured in the USA, Canada, Japan and the UK.

Jessica sings and plays saxophone, 12-string guitar and percussion in the band.

She has also opened most of the shows along with Christian Thomas on bass, joined sometimes by Jessica’s brother Morgan Visconti, when they alternate lead vocals.

The second studio album from Jessica has her returning to her acoustic roots as she plays guitar, saxophone, ukulele and kazoo, as well as using her fantastic voice to great effect on the ten new tracks.

Jessica’s first album, ‘I Am Not’, was a mixture of acoustic and electronic songs, and the bonus track on this second album is an acoustic, live reworking of the track This is My Love Song To You on which she is backed by her brother Morgan Visconti and her father Tony Visconti.

If you think that name is familiar, you are right, famed record producer Tony is her father, and no doubt her voice is inherited from her mother – Mary Hopkin. (She also works alongside her father – who was David Bowie’s producer, in the Bowie supergroup Holy Holy, which includes Bowie’s bandmate Woody Woodmansey and Heaven 17’s Glenn Gregory.)

There is an organic feel to the album – in fact, the saxes were recorded on the A470, on the way to Brecon.

The whole album is wonderfully melodic, and with her undoubted musical skills on various instruments, her lyrics are thoughtful, especially on tracks like What The Hell Was I Thinking, You Get What You Deserve, and Nobody Knows.

Following release the charity continues working with the ex-prisoner through concerts in the community and music sessions, which can help to counter the lack of focus and depression which are common in the critical first few months after release. Currently, 85% of the participants do not reoffend within the first two years of release. This is a 75% reduction on the national average.

Changing Tunes has been operating since 1987 and currently works in 13 prisons in southern England. The continued success of projects since 1987 led the Trustees to decide to expand the work of Changing Tunes via a regional charity franchise model to maintain close links with the local community and reduce the risks and costs associated with creating a large national charity. Beginning in August 2013, Changing Tunes (London & South East) was awarded independent charitable status by the Charity Commission in July 2014 and Musicians in Residence have been appointed for HMP Wandsworth, HMYOI Aylesbury and HMP Send to add to work started in HMP Bronzefield. When they heard about our plans for London and the South East both Sir Simon Rattle and Sir Tim Rice agreed to become Changing Tunes patrons.

“Music restores and transforms as nothing else can. I have been fortunate to have had a long-running and deeply fulfilling musical career. I know what can be achieved, so I am very glad to support the immensely worthwhile work of Changing Tunes as it expands into prisons in London and the South East.” Sir Tim Rice

Changing Tunes is extremely grateful for the support of St George’s Church as our work grows in London and the South East. The focus of our work is the rehabilitation of prisoners through music underpinned by a shared Christian ethos.

If you would like to know more about our work in London and the South East please get in touch.