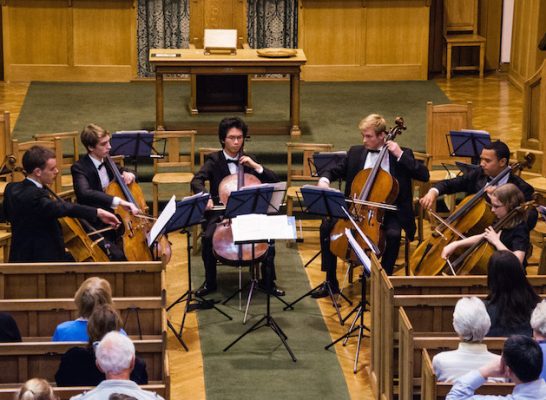 This concert replaces Patricia Williams’ ‘Her Infinite Variety’ which has had to be postponed (we hope only until the Autumn) due to illness.

The programme will include pieces by Barber, Bernstein, Gritton, Lachner, Piazzolla, Sherman, Stanford and Thiele.

After reading music at Lancaster University, Mary went on to study ‘Cello at the Guildhall School of Music. She played in the Bangkok Symphony Orchestra before beginning her teaching career with Bromley. Since then Mary has also spent a summer teaching Cello at the Fine Arts University in Phnom Penh, Cambodia and more recently coached on the Pro-Corda Chamber Music course. She was appointed Assistant Head of Strings in January 2002.

Formed by its director, Mary Nuttall and now in its third season, Cello Massiff has already gained a reputation for excellence, as well as an impressive CV of concert venues.

In 2015 the group performed in the Fairfield Croydon foyer as part of the pre‑concert series; in the Clore Ballroom in the RFH, in Birmingham Conservatoire as part of the finals of the National Festival of Youth Music; and in the renowned Kaiser Wilhelm Memorial Church in Berlin. Cello Massiff also had the privilege of receiving a masterclass with Guy Johnston and then later performing in his recital.

Drawn from the cello section of BYCO, Cello Massiff’s repertoire extends from mainstream classical to jazz and rock music. Many of the pieces they perform are arranged by members of the group. Cello Massiff can be heard on BYCO’s latest CD: Sunrise.

The Group featured in BYCO’s 2014 Festival concert at St. George’s and gave their first full concert at St. George’s in last year’s festival. We are delighted to welcome them back again to this year’s festival and extremely grateful to them for stepping in at such short notice to replace our previously advertised event ‘Her Infinite Variety’, which has unfortunately had to be postponed .

The Bromley Youth Chamber Orchestra (BYCO) was formed in 1977. It consists of 40 talented young string players aged 13-18, and is the flagship string ensemble of the Bromley Youth Music Trust which is the instrumental service for the London Borough of Bromley in South East London. All the members of the orchestra attend local schools and are involved in a wide range of musical activities in Bromley Youth Music Trust (BYMT) and at school. BYCO regularly appears in major concert venues in London, Birmingham and further afield. Many BYCO members go on to study music at University and Conservatoire, and over the years the orchestra has been well represented in the National Youth Orchestra.

Touring is a regular and important aspect of BYCO’s work – in July 2013 BYCO visited the Lake Garda region of Italy giving 4 concerts including a performance in the ancient San Zeno church in Verona. In the 2012 tour to France, BYCO

performed to packed audiences in Strasbourg Cathedral and the American Cathedral in Paris. In 2011 the orchestra undertook a seven concert tour of Helsinki and Turku in Finland including a concert in Sibelius’ former home, Ainola. In 2007 BYCO was invited to take part in the Karinthia Summer Festival alongside top professional ensembles and in 2006 BYCO appeared live on Estonian TV and performed in Parnu’s internationally renowned David Oistrakh Music Festival.

BYCO has worked with many fine soloists, including most recently Guy Johnston (Cello), Anthony Marwood and Jan Schmolck (violin). BYCO has commissioned works by outstanding composers such as Peter Wiegold and Gareth Wood.

On each of the 8 times the orchestra has taken part in the UK’s National Festival of Music for Youth, between 1996 and 2012, BYCO has been awarded the Outstanding Performance Award. The orchestra has also been top prize winner in the International Festival of Music for Youth in Vienna in 1992 and 2002. In November 2007 BYCO was invited to perform at The Royal Albert Hall as part of the National Schools Prom.

The BYCO is a very well recorded orchestra having broadcast on both BBC Radio and Classic FM; since 1994 it has recorded many highly acclaimed CDs which are available at concerts, price £12, £10 and £5.

Further details about the orchestra are available on the BYMT website at www.bymt.co.uk.

BYMT is regarded as one of the very best music services in the UK. We are pleased that Bromley Council have acknowledged this and continue to support us.

However, in order to operate at the highest level and with the biggest reach, we do need to secure the trust’s financial future.

In our 21st anniversary year, we are specifically raising money for our Music Scholars’ Fund, as all children deserve access to the very best educational opportunities.