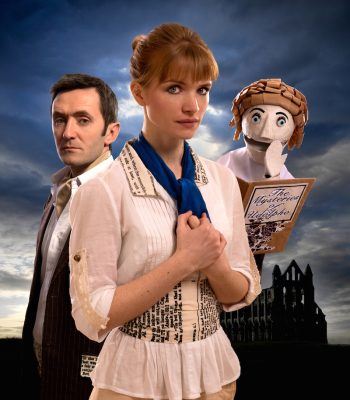 Open to the General Public – Free Event for Friends of The Arts at St. George’s

Box Tale Soup’s version of Jane Austen’s Northanger Abbey has been created and adapted entirely by the company. The production features a cast of just two human performers and seven hand made puppets. Through this award winning adaptation, the company has tried to remain as faithful to the original work as possible, taking the vast majority of the dialogue verbatim from the novel. This, combined with the use of puppetry, has made the production a favourite of Austen lovers and sceptics alike!

Northanger Abbey tells the story of the young, naïve and unlikely heroine Catherine Morland. We follow her to Bath where she is introduced into Society and the delights of the Gothic novel. We see her falling in love with the dashing, witty (if mildly sarcastic) Henry Tilney and we watch with horror as she allows her overactive imagination to get the better of her. It is a heartwarming love story with genuine laugh-out-loud humour and dark, melodramatic Gothic horror!

The Times “…Austen must be smiling down.”

“…one of the best and truest treatments, bar none, in any dramatic medium…”
Libby Purves

“I was completely mesmerised by this enchanting production.”
Joanna Lumley