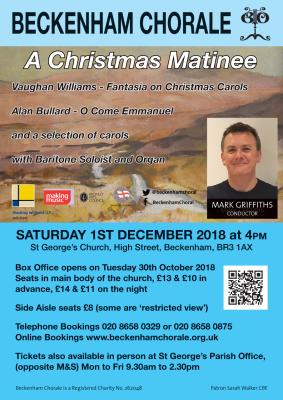 and a selection of carols including some for audience

Side aisle seats £8 (some are restricted view)

In person at St George’s Parish Office (in the church Monday to Friday 9.30am to 2.30pm)

Jonathan Brown was born in Toronto and studied at the Royal Conservatory of Music there, the University of Western Ontario and, after moving to England, at Cambridge University and the Britten-Pears School in Aldeburgh with Sir Thomas Allen and Anthony Rolfe Johnson.   He made his solo debut with Sir John Eliot Gardiner in Holland in a concert of Bach cantatas and thereafter was a regular soloist with performances in Zurich, Brussels and Paris as part of the Bach Cantata Pilgrimage and the subsequent CDs.

Recent solo concert work has included Handel’s Messiah and Bach’s B minor Mass and the St. John and St. Matthew Passions at Westminster Abbey, Haydn’s The Seasons for the Norwich Philharmonic Society, Vaughan Williams’s Sea Symphony for the Portsmouth Choral Union and regular appearances with the OAE and the Gabrieli Consort. He has also worked with Philippe Herreweghe touring South America as Christus in Bach’s St John Passion and he features in Purcell’s Ode to St Cecilia for Harmonia Mundi.  He was also a soloist on the Harmonia Mundi recordings of Purcell’s Dido and Aeneas and Blow’s Venus and Adonis under the direction of René Jacobs, in the Fauré Requiem with the London Festival Orchestra for BMG, Sullivan’s The Golden Legend for Hyperion and, for Priory Records, a recently-released world première recording, also with the Portsmouth Choral Union, of Samuel Wesley’s masterpiece Confitebor tibi, Domine.

Luke has particular skills in training young singers and in 2014 was made an Associate of the Royal Academy of Music.  As Artistic Director of the Rameau Ensemble, he recently gave a masterclass for young artists with Sandrine Piau (Soprano) at Handel & Hendrix (formerly the Handel House Museum) in London.   Although most of his work is in the early and classical repertoire, Luke comes to us hotfoot from Harrogate, where he has been working on a production of Iolanthe for the International Gilbert and Sullivan Festival.