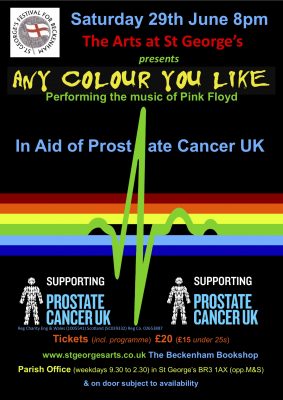 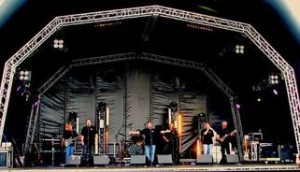 Any Colour You Like (Formerly ‘In The Flesh’) are an 11 Piece Pink Floyd Tribute act based in and around London, England.

The band, a Brainchild of Manager John Bigby, was formed in 1994, consisting of members of the London based band ‘Incubus’ (Not to be confused with the American rock band from Calabasas, California). After some time as a 4 piece act, the band then expanded to 6 members, followed by a tour of Theatres, Venues and Pubs around the South of England in 1996, of which included the Thameside Theatre in Thurrock.

In 1997, they went on to play 22 Gigs across the Country, again including the Thameside Theatre in Thurrock, as well as several Theatres in the south east and many gigs in Venues and Pubs around the country. The Band continued on top form over the next 9 years, more than often filling Theatres and packing out Pubs and Venues, and further expanding their line-up to 7 members.The Band also played at Arsenal Football Club’s Highbury Stadium several times on Match days before they moved to the Emirates.

Unfortunately, in 2006, June Steele, the wife of Alan Steele (Keyboards) became severely ill, which eventually led to the slow dissolving of the Band.

In December 2011, one month after the tragic death of June Steele, 2 of the Original Members (Alan and Ray Steele) decided it was time to reunite the Band, this time focusing on playing for Charity with the hope of Donating all profit made to the Chelmsford based Farleigh’s Hospice, as a way to say thank you for all of the fantastic work and help that they had provided June Steele and her family in her final days.

With the Addition of 6 new members, Peter Hayward, Ricky Steele, Denise Fowler, Paula Coe, Deon O’leary and Vicki Cowles bringing the total number of members to 11, the newly re-named ‘Any Colour You Like’ are back to provide Audiences with their true-to-the-original, exciting and skillful performances of many of Pink Floyd’s greatest works, The new band kicked off on 22nd September 2012 at the Thameside Theatre in Grays and you can see clips of this concert on our entry page.

With the new members joining, all of the band decided that we would extend our charitable donations to an organisation of each individual band members choice. To that end the band are proud to say that they now work for many Medical, Childrens and Hospice charities including Crisis.

The entire entourage of the band which consists of Eleven Musicians and Ten Crew pay their own expenses for Gear, Lighting, Transport and Ancillary costs such as rehearsals, advertising, printing, sustinence etc, and donate 100% of all proceeds to charity.