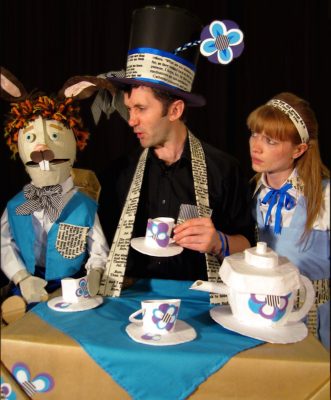 Drawing on the wealth of peculiar episodes from both Adventures in Wonderland and Through the Looking Glass, in this award winning production, Box Tale Soup invite you down the rabbit hole into a timeless world of wondrous fantasy.

Carroll’s Wonderland floods onto the stage in a whirl of strange contraptions and frantic characters. Follow Alice on her remarkable journey, from her fleeting encounters with the White Rabbit to her eventual showdown with the crazed Queen of Hearts.  A confrontational Caterpillar, Ukelele twanging Tweedle twins and an array of others pop up along the way, before Alice comes face to face with her own imagination and perhaps the author of her dreams.

Box Tale Soup’s version of Lewis Carroll’s Alice’s Adventures in Wonderland has been created and adapted entirely by the company. It features a cast of just two human performers, a dozen colourful handmade puppets and a beautiful set that unfolds from a vintage trunk, alongside a magical soundtrack of original music composed especially for the show. From the surprising appearance of the Cheshire Cat to the madness of the Tea Party, this is a constantly inventive and refreshing take on Carroll’s classic work.

Young and old alike will find magic in Wonderland and make it safely home, the only danger is, you may not want to leave!

“…as wonderful as any wonderland could be.” – Fringe Guru 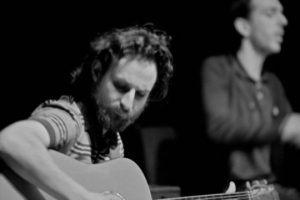 Dan Melrose is a musician based in Manchester. He writes, records and performs music in a variety of genres. You can find out more about his wide range of work by visiting his website.

As well as performing as a singer/songwriter, Dan creates the fantastic original music that can be heard in Box Tale Soup’s shows. For some of these ventures he has also called on the talents of other musical friends, David Carden and Aidan Smith. Dan is also a keen podcaster, and produces music for documentary film and radio.

Dan is involved with many other projects, embracing Hip Hop, Rock, Folk, Dance and Electronica amongst other things.