Refreshment including mince pies during the interval 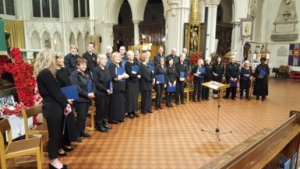 The founding conductor of the South London Singers was Derek Williams. John Nightingale took over as Director in 1988 and stayed in this post for the next 25 years. Under his baton, the SLS continued to raise its musical standards and set new musical goals for itself. John helped to develop the choir’s focus on the neglected portions of the English choral repertoire.

Julian Collings who was Director from May 2013 until February 2019 continued to enable the choir to explore new musical avenues and to maintain its level of musical attainment. Now that Julian has moved to a larger choir, we are delighted to welcome Nicholas Wibberley as our new Director from July 2019. 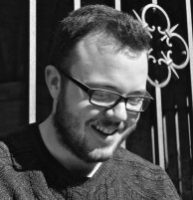 A graduate in music from Goldsmith University, London where he specialised in the organ, singing, and composition, Nicholas is also Director of Music at All Saint’s Church in Orpington having previously held scholarships at St George’s, Beckenham and St Laurence’s, Catford. As a conductor Nicholas enjoys working with a variety of types of choir on a wide range of repertoire and has a particular interest in European music of the 20th century.

Ian Shaw studied at Cambridge (where he was Organ Scholar of St John’s College and a John Stewart of Rannoch Scholar in Sacred Music), the Sweelinck Conservatorium in Amsterdam and (as a mature student) Goldsmiths College.

He has been Sub-Organist at Durham Cathedral and Director of Music at St Peter’s Eaton Square; and worked as a pianist with ENO, Opera North, Northern Ballet Theatre, BBC Scottish Symphony Orchestra and, for eleven years, Scottish Opera.

Lately, he has worked as a freelance repetiteur, especially for Scottish Opera, Music Theatre Wales and Nederlandse Reisopera. He has been involved in numerous world premieres in UK and abroad, coached young singers and pianists at the National Opera Studio and British Youth Opera and played for many choirs, including the BBC Singers and the Bach Choir.

His work has been described as ‘redoubtable’ by The Scotsman and ‘sometimes amusing’ by the Dean of Durham.