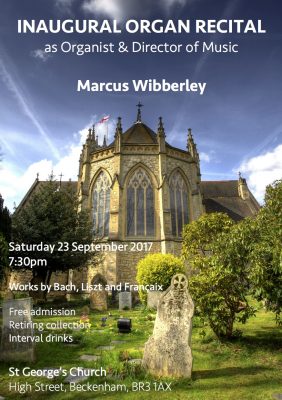 Works by Bach, Liszt and Francaix 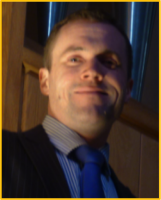 Marcus has just moved to London as Organist & Director of Music here at St George’s Church, Beckenham. Until July, he was Director of Music of Hexham Abbey, where his responsibilities included training and directing the Abbey Choirs. In addition to the four-weekly choral services at the Abbey, he appeared with them in concert both in the UK and in a number of other European countries. Marcus was also Festival Director of the annual Hexham Abbey Festival of Music & Arts, for which he developed the scope of the programme and secured more than £130K in funding from the Arts Council of England.

Marcus was a Chorister of Westminster Abbey under Martin Neary, and his organ teachers included Martin Baker and John Scott Whiteley. He was a music and organ scholar at Dulwich College, and later studied at the University of Hull, where he was University Organ Scholar, graduating with first class honours in Music. He held organ scholarships at Chichester Cathedral, Beverley Minster (while a student in Hull) and latterly York Minster before becoming Sub-Organist of Portsmouth Cathedral and the Music Adviser to The Diocese of Portsmouth in 2005. His BBC broadcasts and CD recordings have been met with wide acclaim.