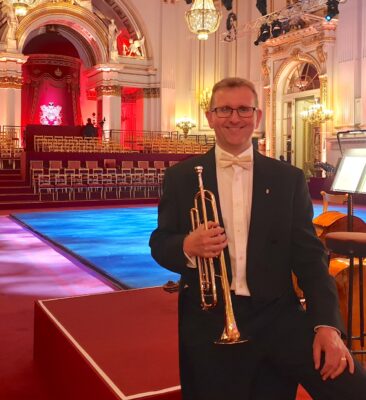 We regret that due to London’s transfer to Covid Tier 3 with effect from 16th December this concert will now be rescheduled to a date in 2021 to be advised. We will contact ticket purchasers shortly to advise options for having tickets honoured for the rescheduled concert date or arranging refunds.

This event is subject to Covid-19 Precautions and Restrictions. Our Covid-19 Notice which can be accessed via this link. It is important that you read the notice before buying tickets.

The concert will last approximately 1 hour.

Christopher is Principal Trumpet of the Royal Ballet Sinfonia and Professor of Trumpet at the Guildhall School of Music and Drama.

In the recording studios Christopher has recorded, often as Solo Trumpet, many of the major Hollywood film and television soundtracks, including the Harry Potter films, Marvel Avenger films, Disney films, Downton Abbey and Doctor Who.

He has performed and recorded with many of the finest chamber ensembles in the UK, including the Symphonic Brass of London, Royal Opera House Brass Soloists, LSO Brass, RPO Brass and the Black Dyke Mills Band.

As a soloist, Christopher has performed in many of the major venues and festivals in the UK and internationally, including Paris, Madrid, Hamburg, Oslo, Milan and Hong Kong, and was honoured to play the Piccolo Trumpet at the wedding ceremony of His Royal Highness, Prince of Wales and the Duchess of Cornwall at St Georges Chapel, Windsor.

He has taught and given masterclasses for the Guildhall School of Music and Drama, Royal Northern College of Music, Royal Birmingham Concervatoire, Lisbon Conservatoire, Dartington International Summer School and the National Youth Orchestra of Great Britain. Christopher is an Associate of the Royal Academy of Music and is a Salvationist and Bandsman at the Bromley Temple Salvation Army. 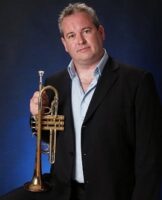 An outstanding Trumpeter of his time

Ian Balmain will be remembered as one of the most outstanding trumpeters of his time, and was the most modest, generous, and unassuming individual you could possibly meet.

His beautiful sound and musicality always shone through the Orchestra, and his warm, caring personality, wicked sense of humour, and friendliness made him popular wherever he went.

Ian was born in Wrexham, and studied at the Royal College of Music with David Mason. His reputation quickly grew, and he was appointed Co- Principal, and later Principal Trumpet of the Royal Liverpool Philharmonic Orchestra, appearing as soloist with the Orchestra on many occasions.

After 13 years in Liverpool, Ian was invited to join the Royal Philharmonic Orchestra as Principal Trumpet, where his playing was heard throughout the world, from the USA and Europe, to the Far East.

In 2003 Ian joined the Orchestra of the ROH, where audiences have been lucky to hear his sensational performances over the years, and enjoy his company and friendship.

From a Ballet Triple Bill, to Salome, or a Verdi Opera, Ian’s playing was always sensitive and inspirational. He had the exceptional ability of being able to turn a performance into something special, grabbing everyone’s attention, and thrilling the audience and Orchestra alike, with his exciting and soaring sound. He will be sorely missed by everyone. His children Matty and Lucy, of whom he was immensely proud, his family, and by all of us, his friends and colleagues.