Tickets on sale from 29th October

In person at St George’s Parish Office (in the church) Monday to Friday 9.30am to 2.30pm 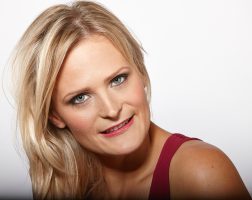 British soprano Charlotte Shaw (née Beament) is a first class honours graduate of the Guildhall School of Music and a ‘Rising Star of the Enlightenment’ for the Orchestra of the Age of Enlightenment.   She is a regular soloist for English National Opera and Glyndebourne Festival Opera and has also sung for Glyndebourne Jerwood Artists, the Garsington Festival, the Brighton Festival, the London Handel Festival and Barber Opera in Birmingham.

Her operatic repertoire includes Tytania in Britten’s A Midsummer Night’s Dream and Lucia in The Rape of Lucretia, the title roles in Handel’s Semele and Berenice and Michal in Saul, and Mozart’s Barbarina in Le nozze di Figaro, Zerlina in Don Giovanni and Serpetta in La finta giardiniera.    She has also appeared in works by Purcell, Rameau, Niccolo Porpora and Marc-Antoine Charpentier and, on the contemporary scene, in Julian Philips’s chamber opera The Yellow Sofa, Philip Glass’s Satyagraha and the ENO’s 2017 première of Nico Muhly’s Marnie.

On the concert stage she has sung many favourite Baroque and Classical works from Bach’s Passions, B minor Mass and Christmas Oratorio and Handel’s Messiah, Israel in Egypt and Saul to Mozart’s solo motet Exsultate, Jubilate and Requiem, and Haydn Masses, The Creation and The Seasons.   Charlotte’s repertoire extends also to Vivaldi’s solo motet Nulla in mundo pax sincera, Mahler’s Fourth Symphony, Strauss’s Vier letzte Lieder and the famous fifth of the Bachianas Brasileiras of the Brazilian composer Heitor Villa-Lobos, in venues including the Queen Elizabeth Hall, Cadogan Hall, Kings Place and Snape Maltings as well as on European and Asian tours.

Jonathan Brown was born in Toronto and studied at the Royal Conservatory of Music there, the University of Western Ontario and, after moving to England, at Cambridge University and the Britten-Pears School in Aldeburgh with Sir Thomas Allen and Anthony Rolfe Johnson.   He made his solo debut with Sir John Eliot Gardiner in Holland on the Bach Cantata Pilgrimage and thereafter was a regular soloist with performances in Zurich, Brussels and Paris and on the subsequent CDs.

Recent solo concert work has included Handel’s Messiah and Bach’s B minor Mass and the St. John and St. Matthew Passions at Westminster Abbey, Haydn’s The Seasons for the Norwich Philharmonic Society and Vaughan Williams’s A Sea Symphony for the Portsmouth Choral Union.   He was also a soloist on the Harmonia Mundi recordings of Purcell’s Dido and Aeneas and Blow’s Venus and Adonis under the direction of René Jacobs, in Sullivan’s The Golden Legend for Hyperion and, for Priory Records, a recently-released world première recording, also with the Portsmouth Choral Union, of Samuel Wesley’s masterpiece Confitebor tibi, Domine.

With a varied repertoire it is best known for our spirited performances of the great and exciting choral works. In recent years, works performed include Bach ‘Magnificat’, Vivaldi ‘Gloria’, Rossini ‘Stabat Mater’, Dvorak ‘Mass in D’, Tippett ‘A Child of our Time’, Handel ‘Messiah’ and Verdi ‘Requiem’.’