Hailed as “remarkable” by the Daily Telegraph, British trumpeter Matilda Lloyd is a fast-rising young artist with exceptional poise and musicality. Aged 24, Matilda is captivating audiences with her artistry and communication, her flawless technique and the unique character she brings to each and every work.

In 2014, Matilda was the winner of the BBC Young Musician of the Year Brass Final, and in 2016, gave her BBC Proms solo debut, performing at London’s Royal Albert Hall with the BBC Philharmonic and Alpesh Chauhan. The following year, Matilda won the Eric Aubier International Trumpet Competition in Rouen, France, an achievement which led to her international debut in Spring 2019 with l’Orchestre de l’Opéra de Rouen. Recent highlights also include performances with the BBC Concert Orchestra (for BBC Radio 2’s Friday Night is Music Night) and the London Mozart Players. In March 2018, she was chosen to replace Tine Thing Helseth for a celebration of International Women’s Day with theManchester Camerata under Jessica Cottis.

Matilda graduated with a First Class degree in Music from Cambridge University in 2017 and received a Master’s Degree from the Royal Academy of Music in 2019. Matilda will receive lessons during this season from Håkan Hardenberger at the Malmö Academy of Music. 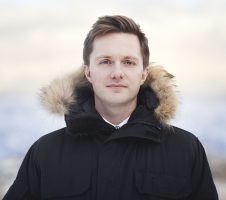 James McVinnie’s work as a performer encompasses music from the 16th century to the present day. He has collaborated with many leading figures in new music including Philip Glass, Tom Jenkinson/Squarepusher, Angelique Kidjo, Nico Muhly, Martin Creed, David Lang, Richard Reed Parry, Bryce Dessner & Darkstar, many of whom have written large scale works for him.

James McVinnie is a member of Icelandic record label Bedroom Community. 2019 saw the release of All Night Chroma on Warp Records and 2020 will see a new album of works by Philip Glass for organ & piano.

2020 and 2021 highlights include solo performances at Paris Philharmonie, Lyon Auditorium, Walt Disney Concert Hall Los Angeles, Southbank and Barbican Centres as well as the opening of the Munich Philharmonic 2020/21 season, and concerto performances with the London Philharmonic Orchestra.