This concert presents a pair of masterpieces for soloists, chorus and orchestra by two of the greatest composers of the Classical period.

Available from choir members and the Chorale’s Box Office

A very limited number our tickets are available from the Parish Office in St. George’s BR3 1AX 9.30 to 2.30 Monday to Friday.

Mozart’s Vespers, K.339, is among the  last works he wrote in his native city of Salzburg before his move to Vienna in 1781.   Consisting of settings of five vesper psalms and the Magnificat, it is thought to have been intended for the feast of a saint who was worshipped as a confessor.   The word ‘solennes’ in the title merely indicates ‘solemn ritual’, i.e. with the full panoply of ceremonial, and by implication orchestral rather than organ accompaniment;  the music is, of course, hardly ‘solemn’ as we understand the word.

Beethoven’s Mass in C, his first sacred work of note, was produced in 1807 for the name-day of the wife of Prince Nikolaus II Esterhazy, who for many years had commissioned a new annual mass setting for that occasion;  notably, Haydn’s last six great masses had been produced for this purpose in the years up to 1802, and must have been very much in Beethoven’s mind as he wrote.   Beethoven’s music, however, breaks much new ground, revealing him as much as any other work as a leading player in the transition from the Classical to the Romantic age in music.

Christina Petrou graduated with an Honours Degree in Music from the Guildhall School of Music and Drama.   She has taken part in master classes with Dame Kiri Te Kanawa and Ian Partridge and currently studies with Sarah Pring.   On the concert platform Christina’s repertoire includes Handel’s Messiah and Haydn’s Nelson Mass and Missa Sancti Nicolai.   She has given recitals at St George’s, Bloomsbury, Rosslyn Hill Chapel and Bishopsgate Institute, and participated in Graham Johnson’s The 1880s concert series at the Guildhall School of Music and Drama as well as performing at the Voiceworks concert at Wigmore Hall.

Her operatic roles in recent seasons have included Lauretta in Puccini’s Gianni Schicchi for Opera Holland Park, Masha in Tchaikovsky’s The Queen of Spades for Grange Park Opera, Clorinda in Rossini’s La Cenerentola for the Clapham Opera Festival, creating the role of Maid in Llywelyn ap Myrddin’s opera The Crocodile for the Tête à Tête Festival, Adina in Donizetti’s L’Elisir d’Amore for Pavilion Opera and Winterbourne Opera,  Bubikopf in Viktor Ullmann’s The Emperor of Atlantis for Dioneo Opera, Giovanna in Verdi’s Rigoletto for Bury Court Opera and the Sailor in Purcell’s Dido and Aeneas for the same company’s all-female production, and Venus in John Blow’s Venus and Adonis for Hampstead Garden Opera.   For Scottish Opera she has performed Yum-Yum in Gilbert and Sullivan’s The Mikado and Barena in Janacek’s Jenůfa.

Jeanette Ager was awarded an Exhibition to study at the Royal Academy of Music in London, and went on to win the Gold Medal in the Royal Over-Seas League Music Competition and the Richard Tauber Prize.   Her concert and oratorio work as a soloist has included recitals at Wigmore Hall, Handel’s Messiah at St. David’s Hall, Cardiff, Elgar’s The Dream of Gerontius at the Queen Elizabeth Hall, Tippett’s A Child of our Time at the Royal Festival Hall, Verdi’s Requiem at Gloucester and Hereford Cathedrals and Beethoven’s Missa Solemnis at the Barbican Hall.   She also sang the part of the Angel in the first performance of Elgar’s The Dream of Gerontius in China.

Her operatic roles have included Cherubino in Mozart’s The Marriage of Figaro, Dido in Purcell’s Dido and Aeneas, Rosina in Rossini’s The Barber of Seville, Suzuki in Puccini’s Madama Butterfly and Thea in Tippett’s The Knot Garden.   With the Royal Opera House she recently appeared as one of the Apprentices in Wagner’s Die Meistersinger von Nürnberg.

Daniel Joy studied music at Durham University where he gained a first class music degree, was awarded the Eve Myra Kisch Price Prize for outstanding academic achievement and was a choral scholar at Durham Cathedral, before studying on the postgraduate vocal course at the Royal College of Music, and recently graduated with distinction from the opera course at the Guildhall School of Music and Drama.

His recent concert performances have included Verdi’s Requiem at the Royal Albert Hall, Elgar’s The Dream of Gerontius at Eton College, Finzi’s Dies Natalis with the Britten Sinfonia, Handel’s Messiah at Cadogan Hall, the Evangelist in Bach’s St John Passion at St. Martin-in-the-Fields, Monteverdi’s Vespers of 1610 with the English Cornett and Sackbut Ensemble, Haydn’s Missa Sancti Nicolai with the European Union Chamber Orchestra, Finzi’s Intimations of Immortality in Cambridge, the Evangelist and arias in Bach’s Christmas Oratorio with the Armonico Consort and Britten’s Saint Nicolas at Durham Cathedral, as well as recitals of songs by Tchaikovsky accompanied by Liubov Orfenova, and Monteverdi madrigals in the Glyndebourne Festival as part of the Jerwood Young Artists Development Scheme.

Daniel made his professional stage debut as Kozak in Roman Statkowski’s Maria for Wexford Festival Opera, also broadcast on BBC, Schweizer Radio DRS and RTE Radio Ireland.   He has returned to Wexford to perform as the Poor Horn Player in Delius’s A Village Romeo and Juliet and as Gherardo in Puccini’s Gianni Schicchi.   He also sang the title role in Britten’s Albert Herring at the Guildhall School, Adolfo and Gobin in Puccini’s La Rondine for Opera di Peroni and Go Opera, the Duke in Verdi’s Rigoletto and Goro in Puccini’s Madama Butterfly, both for Opera Brava. 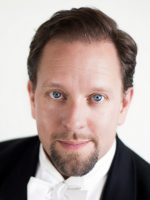 Jonathan Brown was born and raised in Toronto.  He has studied at the Royal Conservatory of Music there, the University of Western Ontario and the University of Cambridge (England) as well as the Britten-Pears School in Aldeburgh with Sir Thomas Allen and Anthony Rolfe Johnson.

He made his solo debut with Sir John Eliot Gardiner in Naarden, Holland in a concert of Bach cantatas and thereafter was a regular soloist with performances in Zurich, Brussels and Paris.   He has worked regularly with Philippe Herreweghe, touring South America as Christus in Bach’s St John Passion, and he features in Purcell’s Ode to St Cecilia for Harmonia Mundi.   He was a soloist on the Harmonia Mundi recordings of Purcell’s Dido and Aeneas and Blow’s Venus and Adonis under the direction of René Jacobs.   He has recorded the baritone solos in the Fauré Requiem with the London Festival Orchestra for BMG and appears as the Forester in Sullivan’s The Golden Legend for Hyperion.

His operatic roles have included Marcello in Puccini’s La Bohème at the Royal Albert Hall, Belcore in Donizetti’s L’Elisir d’Amore, Count Almaviva in Mozart’s The Marriage of Figaro, Prince Yamadori in Puccini’s Madama Butterfly, Cavalli’s Giove in La Calisto and Orestes in Giasone, Handel’s Garibaldo in Rodelinda and Ariodate in Xerxes, Silvio in Leoncavallo’s Pagliacci, Dr. Malatesta in Donizetti’s Don Pasquale, Masetto in Mozart’s Don Giovanni and Aeneas in Purcell’s Dido and Aeneas.   He has performed the role of Trojan in Mozart’s Idomeneo for Sir Simon Rattle with the Berlin Philharmonic in the Salzburg Easter Festival and in Monteverdi’s L’Orfeo at the Opéra de Lille, the Théâtre du Chatêlet, Paris and L’Opéra du Rhin with Emmanuelle Haim.