The Genius of Gilbert and Sullivan – an evening with Peter Medhurst
Monday 22nd June 2020 at 8:00 pm 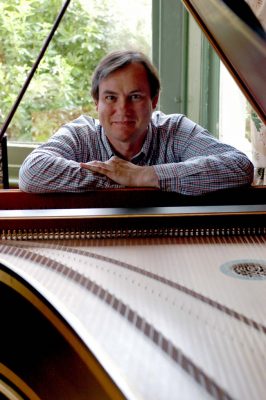 Peter Medhurst’s work as singer, pianist and lecturer-recitalist has taken him all over the world, and in the last few years he has toured New Zealand, Australia (twice) and South Africa (four times), and made frequent tours in Europe, giving performances in Berlin, Hamburg, Vienna, Salzburg, Brussels, Antwerp, Amsterdam, Paris and Spain.  Closer to home, he has presented events at the Barbican, St John’s Smith Square, and the Royal Festival Hall on The Beethoven String Quartets, Mozart Operas, Vermeer’s Music Lesson, The Twelve Days of Christmas, The Golden Age of Vienna, and 18th Century Venetian Art and Music.  He has also directed presentations at the Wallace Collection, the National Gallery, the National Portrait Gallery and the V&A, linking the visual arts with the world of 17th & 18th century music making.

He is a familiar face to audiences of music societies, regional theatres and British festivals (Henley, Isle of Man, Rye, Amersham, Stevenage, Chichester, Leith Hill, The Three Choirs etc) as well as to those of arts based organisations such as The Art Fund, The National Trust and the Arts Society (formally known as NADFAS).  On the radio, his appearances have included Classic FM’s Susanna Simons’ Show, Radio 3’s In Tune, Radio 4’s Arts Programme, and Midweek with Libby Purves.  His recordings number For Two to Play, Schubert Songs, Handel and His Satellites and a CD of 16th and 17th century keyboard music entitled Tyme at the Virginalls.  A new recording with pianist Jeremy Limb has been released entitled On Christmas Night on which he sings a range of Christmas carols and seasonal songs.

In addition to his appearances on the concert platform and in the lecture hall, Peter Medhurst sets aside time to devise and lead tours abroad (often with Thomas Abbott, tour guide extraordinaire) for small groups of art and music connoisseurs.  His particular interests are centred on the music, art and history of Vienna, Salzburg (with its strong Mozart link), Berlin, Halle (Handel’s birthplace), Dresden, Venice (Vivaldi’s birthplace), Rome, Madrid, and Delft (with its Vermeer and 17th century Dutch School connections) and over the years Peter has been associated with a number of travel companies including Cox and Kings, Travel Editions, Success Tours, Heritage Travel, Tailored Travel, and Voyages to Antiquity (see Tours for more information).

Peter Medhurst was born of German and English parents, and did his musical training at the Royal College of Music where he studied singing with Redvers Llewellyn and Edgar Evans, organ with Richard Popplewell, composition with Justin Connolly and music history with Else Mayer-Lismann, Christopher Grier and Joseph Horowitz.  In 1978, a scholarship from the Austrian government gave him the opportunity to have coaching with the accompanist Erik Werba at the Mozarteum in Salzburg.  On his return to England he took harpsichord lessons with Ruth Dyson, who became his accompanist and fellow keyboard duettist in a professional partnership that lasted until her death nearly 20 years later.

Over the years Peter Medhurst has lectured for the universities of Kent and Surrey, directed a wide range of choirs, vocal ensembles and instrumental groups, and adjudicated and given masterclasses for the British Federation of Music Festivals.

He is director of The Classical Music Company an organisation that promotes special musical events, creates films about the arts, produces recordings and organises specialist music tours to unusual locations both at home and abroad.

Peter Medhurst is based in London.