At the Drop of a Hippopotamus – an Evening with Flanders and Swann
Thursday 25th June 2020 at 8:00 pm 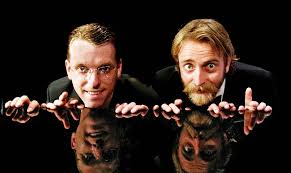 Michael Flanders and Donald Swann were the biggest musical comedy stars of the 1950s and 1960s. Mud, Mud Glorious Mud (The Hippopotamus Song), The Gnu Song, The Gasman Cometh, and many of their other songs have passed into legend.

With 16 live UK tours, seasons all over the world, performances for Royalty, 11 seasons at the Edinburgh Festival, BBC Radio 2’s Friday Night is Music Night, tens of thousands of hits on YouTube, and the largest selling Flanders and Swann album (other than the originals…naturally) what started as the boys’ attempt to keep the Hippopotamus wallowing has become a global phenomenon.

Critic’s Choice in The Sunday Times, The Guardian, The Evening Standard, and Three Weeks.

“Wallowing in a Muddy Marvellous Revival. Wheelchair using vocalist Flanders and bright eyed pianist Swann have both now gone to the great loose ends broadcast in the sky but whippersnappers Tim FitzHigham and Duncan Walsh Atkins are flying the flag with this winning celebration. The songs remain masterfully comic compositions…if you think Eminem is the last word in lyrical dexterity listen to FitzHigham – a younger, sexier Richard Stilgoe – wrap his tonsils around Flanders’ tongue-tangling Have some Madeira M’dear. This unashamedly retro revue will not change your voting habits however for admirers of cabaret with impeccable manners these Swann songs certainly fit the bill”

“An energetic and charming portrayal…an infectious joy that leaves you admiring their heroes as much as they obviously do.”

“Chaps don’t have to play rugger any more and Nigel Molesworth’s “gurls” are running the show, but there’s still plenty of vim in the songs of Flanders and Swann. Tim FitzHigham sports an impressive beard, while the bespectacled Walsh Atkins submits to suave teasing over his preference for living in the lower depths (known to most of us as Battersea)”