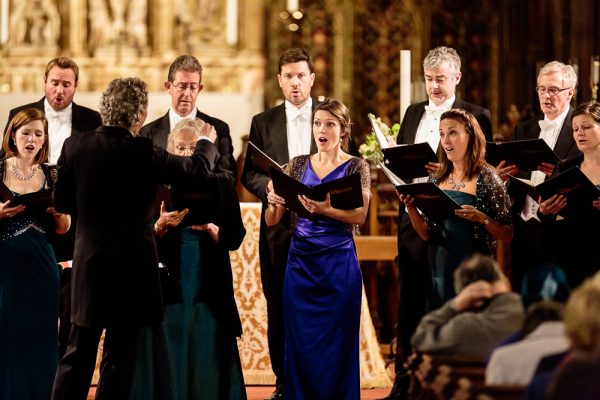 There will be a licensed bar or bars for this event under the auspices of a TEN licence from Bromley Council. Refreshments may be purchased during the interval only.

Whether performing a simple medieval hymn or expressing the complex musical and emotional language of a contemporary choral composition, The Sixteen does so with qualities common to all great ensembles. Tonal warmth, rhythmic precision and immaculate intonation are clearly essential to the mix. But it is the courage and intensity with which The Sixteen makes music that speak above all to so many people.

The Sixteen gave its first concert in 1979 under the direction of Founder and Conductor Harry Christophers CBE. Their pioneering work since has made a profound impact on the performance of choral music and attracted a large new audience, not least as ‘The Voices of Classic FM’ and through BBC television’s Sacred Music series.

The voices and period-instrument players of The Sixteen are at home in over five centuries of music, a breadth reflected in their annual Choral Pilgrimage to Britain’s great cathedrals and sacred spaces, regular appearances at the world’s leading concert halls, and award-winning recordings for The Sixteen’s CORO and other labels.

Recent highlights include the world premiere of James MacMillan’s Stabat mater, commissioned for The Sixteen by the Genesis Foundation, an ambitious ongoing series of Handel oratorios, and a debut tour of China.

Harry Christophers stands among today’s great champions of choral music. In partnership with The Sixteen, he has set benchmark standards for the performance of everything from late medieval polyphony to important new works by contemporary composers.

Under his leadership The Sixteen has established its hugely successful annual Choral Pilgrimage, created the Sacred Music series for BBC television, and developed an acclaimed period-instrument orchestra. Highlights of their recent work include an Artist Residency at Wigmore Hall, a large-scale tour of Monteverdi’s Vespers of 1610, and the world premiere of James MacMillan’s Stabat mater; their future projects, meanwhile, comprise a new series devoted to Purcell and an ongoing survey of Handel’s dramatic oratorios.

Harry Christophers has served as Artistic Director of the Handel and Haydn Society since 2008, is Principal Guest Conductor of the City of Granada Orchestra and has worked as guest conductor with, among others, the London Symphony Orchestra, the BBC Philharmonic, the San Francisco Symphony Orchestra and the Deutsches Kammerphilharmonie. Christophers’ extensive commitment to opera has embraced productions for English National Opera and Lisbon Opera and work with the Granada, Buxton and Grange Park festivals.

Harry Christophers was awarded a CBE in the Queen’s 2012 Birthday Honours list. He is an Honorary Fellow of Magdalen College, Oxford, as well as the Royal Welsh College of Music and Drama, and has Honorary Doctorates in Music from the Universities of Leicester and Canterbury Christ Church.